Pathan said that he is trying hard to get selected in the Indian team.

The 30-year-old player was in the city to unveil the World Cup 2015 trophy.

Senior players Virender Sehwag, Yuvraj Singh, Gautam Gambhir along with pacer Zaheer Khan and off-spinner Harbhajan Singh, who were part of 2011 World Cup winning team, were not included in the probables list for cricket’s biggest tournament to be held in Australia and New Zealand.

Pacers Ashish Nehra and Munaf Patel, spinner Piyush Chawla and all-rounder Yusuf Pathan were also among players axed from the list announced by BCCI on December 4 after a meeting of the selection committee.

The left-arm medium pacer from Vadodara said India and South Afria are his favourites.

“India would obviously be my favourite team in the next World Cup. Besides, South Africa, with good fast bowlers will have an advantage. I would love to see the final between India and South Africa,” he said.

Pathan said the Indian team will be at advantage because the upcoming series in Australia ahead of the World Cup.

“Indian team will play cricket in Austraila for next two-three months. Our team will surely get the advantage of it. Players will become familiar and acclimatised with the conditions there and will get its advantage in the World Cup,” Pathan, who last played in an ODI on August 4, 2011, said.

On being asked about cricket legend Sachin Tendulkar‘s absence in the Indian side, who represented India in a record six World Cups, Pathan said it is next to impossible to replace the position vacated by the icon.

“He will be missed not only by India but at every cricketing platform in the world. But as Sunil Gavaskar was legendary and when he went.. [later] his vacuum was filled by Sachin, we can hope some of the young players will try to take his [Tendulkar’s] position. But it is for sure that we will miss Sachin Paji,” he said.

On his chances of a comeback, Pathan said that he is trying hard to get selected in the Indian team and he hoped to achieve that by performing in the Ranji Trophy. 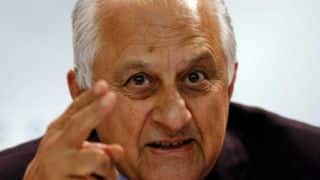 PCB promises to not repeat security lapses of 2009