Ishant underwent an MRI scan on Monday and the reports confirmed that showed that he has an ankle tear. Senior India pacer Ishant Sharma is in doubt for the upcoming Test tour of New Zealand after he suffered a Grade 3 tear on his right ankle while playing for Delhi in their Ranji Trophy encounter against Vidarbha at the Arun Jaitley Stadium on Monday.

Ishant picked up the injury in the fifth over of Vidarbha’s second innings – his third over. The 31-year-old twisted his ankle and was seen writhing in pain. He had to be taken off the ground immediately with the help of support staff to provide medical assistance.

It was a short delivery, which rival skipper Faiz Fazal tried to pull but the ball hit the pads, as Ishant vociferously appealed on the follow-through before slipping suddenly.

The two-match Test series between Indian and New Zealand is scheduled to start from February 21 in Wellington.

“The MRI report has come. Luckily there is no fracture. There is an ankle tear. The moment he is in a position to walk, he will travel to NCA,” a senior DDCA official told PTI on conditions of anonymity.

While there are reports that Ishant might have had a Grade 3 tear, which can rule him out for more than a month, the BCCI will only confirm it after their own set of tests.

“It’s a Standard Operating Procedure (SOP) in BCCI as we will again do his MRI to ascertain the degree of tear and decide on his rehabilitation,” a BCCI source said.

The BCCI is hopeful of Ishant getting fit in time for the first Test.

Navdeep Saini will be the replacement if the 96-Test veteran fails to be fit in time. 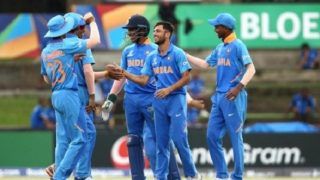