Ishant Sharma looked well short of his best in the practice game.

A listless Ishant Sharma was heckled by Indian fans on the third day of the drawn warm-up game against Leicestershire when the gangling paceman struggled to contain his wayward bowling.

Ishant, who is the only bowler in the current line-up with the experience of bowling in English conditions, began with a flurry of no balls and ended up leaking 64 runs in nine over even as he got two wickets in the fag end of the contest.

In his first spell of four overs, he conceded 41 runs and sent down six no balls.

According to a report in Cricinfo, as Ishant walked towards his fielding position at long leg, Indian fans peppered him with verbal volleys.

“Put some effort. Bend down,” one fan shouted.

As he lined up to deliver another over, Ishant would not have missed the annoying scream coming from the crowd: “How many fours are you going to give this over?’, the report said.

In India’s touring party, Ishant [55 Tests] is second most capped player after skipper MS Dhoni, who has played 83 matches in the longer-format. 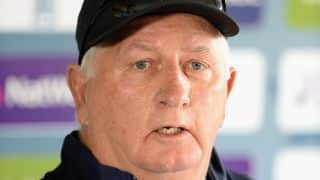