Ajit Agarkar believes Ishant Sharma must make use of his experience to pick up more wickets.

Former India pacer Ajit Agarkar feels that Ishant Sharma should step up in a leadership role as the bowling unit has the skill set and ability to take 20 Australian wickets in the third Test starting on December 26 at the Melbourne Cricket Ground (MCG).

“Ishant needs to do a bit more in terms of getting wickets. He got some in the second innings but first innings he was not that good. Maybe, he needs to step up and get more wickets with the kind of experience he has. So I don’t think he is bowling poorly but it’s time he starts spearheading the attack and taking wickets,” said Agrakar.

Agarkar also had a word of advice for the inexperienced duo of Umesh Yadav and Varun Aaron. “Umesh came into the side in Brisbane and bowled well. Varun Aaron needs to be a bit more consistent. He gave away too many runs in both the matches. But they are just too inexperienced. They will need some time. Just like the batsmen need time to settle down to the experience of different conditions, so do the bowlers,” he added.

Agarkar said that the younger lot have done well but they just need to be more consistent to perform well in foreign conditions. “They almost did pick up 20 wickets in the last Test. If there is help in the pitch it generally suits India overseas. Obviously they need to put the runs on the board. They have definitely got the ability to get 20 wickets, they just need to be more patient and consistent,” said the former pacer, who is part of the video show ‘Match Point’ on ESPNCricinfo.

Many believed that Bhuvneshwar Kumar‘s absence hurt India in the first two matches that they lost but Agarkar feels that a single player does not affect a team performance. “Bhuvneshwar has been one of their main guys in Test matches but I don’t think his absence has really hurt India. I think India were in really good positions to win Test matches but they have just not taken those chances. “I think they have not grabbed the opportunities that have come their way and Australia have grabbed them. I don’t think one player being there or not really makes a difference,” he said.

Going into the Boxing Day Test with a 0-2 trail in the four-match Test series, India are in a must-win situation to even draw level. Agarkar, like many, opines that India winning two games is a far-fetched thought.

“On the basis of current evidence, I can’t imagine India winning two Test matches in a row, because you got to play well for 10 days. Unfortunately, India has just managed to play well on three and a half days in each Test, which is sometimes not good enough. They have been a lot closer than maybe on previous tours against Australia,” he said.

“I don’t think there has been a lot of difference between the two teams but probably one of the weaker or inexperienced Australian teams India have played against when they have toured Australia. So India have a chance but like I said they got to grab the big moment, which I think they don’t seem to be doing, he added.

Agarkar also said that it’s not Virat Kohli, who captained India in the Adelaide Test, but the overseas losses that is putting pressure on Mahendra Singh Dhoni. “The results are putting pressure on Dhoni and not Kohli. Virat has only captained one Test and Dhoni has captained India for a period of time and has had a lot of success and some failure as well. especially overseas,” Agarkar, who played 191 ODIs and 26 Tests for India, said.

“So whether Kohli, who has just captained in one Test, has done well or not makes little difference to how Dhoni fares. Dhoni needs to start winning Test matches and it is as simple as that,” he added. 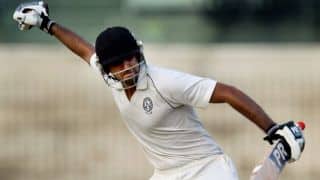 Anushka Sharma to cheer for Virat Kohli at MCG