Sharma's persistent effort to bowl bouncers on a flat wicket earned him results.

Cynosure of all eyes after his fiery spell earned India its first Test victory at the iconic Lord’s in 28 years, fast bowler Ishant Sharma feels his efforts are never appreciated by people other than his team-mates.

“Sometimes, I feel like my efforts are never appreciated by people other than my teammates. Even today, because I got all these wickets, people are praising me,” Sharma said after India notched up a historic 95-run win over England in the second Test on Monday.

“But had I gone for runs, had the plan failed, no one would have appreciated the fact that I was continuously bowling bouncers with an 80-plus overs old ball. “It has always been like that with me and now I am pretty used to it. I am experienced enough to ensure that I don’t get affected by what X Y Z is saying about me. I know that my mates have the belief in me and they appreciate what I do for the team. That’s enough for me to carry on,” he told the official BCCI website.

The 25-year-old pace spearhead grabbed a career-best seven for 74 to bring England‘s downfall and Sharma said his experience of playing at Lord’s in 2011 helped him. “Last time when I picked four wickets at Lord’s, I remember I was bowling very well in the first session but didn’t get any wickets. When I came back on, I got four wickets in no time,” Sharma said.

“It was on my mind today. I knew that on this ground the wickets come in bulk. So, I knew that if I stuck to my ploy patiently, I will get the rewards. I told the same to Shami [Mohammed Shami] and Bhuvi [Bhuvneshwar Kumar] as well, so that they keep the belief and don’t give up,” he said. Sharma’s persistent effort to bowl bouncers on a flat wicket earned him results and he said the experience has taught him a lot.

“Duncan [Fletcher] keeps telling me, ‘bowl more bouncers, bowl more bouncers’. But when you go in with a plan, sometimes it works and at times it doesn’t. Things happen suddenly. Today I got to learn that if you keep trying persistently with the short ball ploy on a flat wicket with nothing in it for you, you can get rewards you never expected,” he said.

Asked if he ever bounced so many batsmen out in one innings before, Sharma said: “No. You keep experiencing new things in life. This was one such new experience for me. I will try to learn from it.” His barrage of bouncers had left England batsmen attempting more hook and pull shots and Sharma said he was not surprised as it was difficult to judge the bounce on a slow five-day old pitch.  “The wicket had slowed down considerably over the five days and because of the footmarks there was a lot of variable bounce. It was very difficult for the batsmen to leave the bouncers, they had to play it and they had to go for the pull or hook,” he said. The senior-most bowler in the team, Sharma said he tries to lead the pace unit on field by sharing his experience with his bowling colleagues.

“When I am on the field, I talk to the other pacers and mainly share my experience in a similar situation. If you want to pick 20 wickets as a team, it is of paramount importance that the bowlers communicate with each other constantly. I just tell them things like how the wicket generally plays and what the particular batsman generally does,” he said. “I do try to be the leader on the field because I have played more matches than them. But once we’re off it, I am not a senior player because we all are almost of same age. So, there is a dual aspect to that role.”

Sharma credited MS Dhoni for the seven wickets he took in the second innings as it was the Indian skipper who had asked him to try bowling bouncers. “In my first spell of five overs, the batsmen go beaten quite a few times and the ball moved as well. So I thought the ball would still be reversing, which didn’t happen. That’s when MS bhai told me that since the ball has become really soft, let’s try something new,” he said.

“He said let’s open up the whole field and bowl only bouncers. This is the last over (before lunch) and you never know what could happen. The plan worked and we decided to continue with it after lunch. “We persisted with the old ball because with the new ball the batsman can judge the bounce with ease, while with the old one he cannot gauge the bounce as some might take off and an odd one will keep low. I feel all the wickets I got today should go to MS bhai because he planned them and set the field for them,” he added. 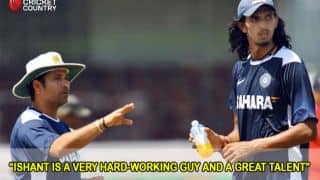 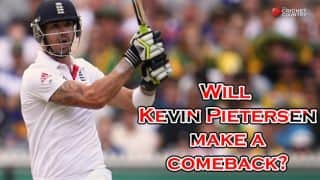