Ishant Sharma takes 7 wickets at Lord's; records best performance by an Indian at the venue in 2nd Test against England

Ishant Sharma takes 7 wickets at Lord's; records best performance by an Indian at the venue in 2nd Test ag

Ishant Sharma recorded best performance by an Indian at the venue in 2nd Test against England.

India pacer Ishant Sharma on Monday registered his name on the Lord s honours board when he claimed his fifth wicket in the ongoing second Test match against England. Ishant achieved the feat when he claimed the wicket of Ben Stokes, caught by Chetershwar Pujara in the post lunch session on the final day of the match.

Matt Prior has been dismissed for 12 on Day Five of the second Test between England and India at Lord s. England are chasing 319 to win and they are now 201 for six. Prior and Joe Root had attacked the Indian bowling as they were bowling way too short. They kept pulling the deliveries and scored 20 off the first two overs after lunch. 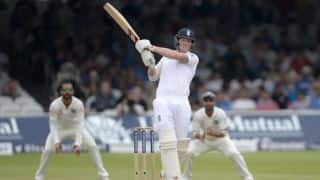