India took a lead of 230 runs bowling out Sri Lanka Board President XI for just 121 in warm-up game at Colombo.

Earlier, India lost wickets in a flurry earlier in the day, with Kasun Rajitha taking five for . India will be happy with their work though on a greenish deck. It was the 134-run stand between Ajinkya Rahane and Cheteshwar Pujara that steadied India after the middle order had collapsed. Shikhar Dhawan and KL Rahul gave India an ideal start, adding 108 runs before the Rajitha struck India. Read: India 314/6 at stumps, Rahane scores hundred, Kohli flops on Day 1 India vs Sri Lanka President XI, India tour of Sri Lanka 2015 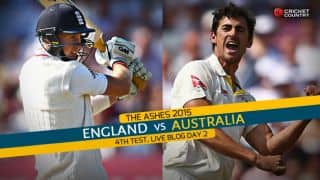 Look what Yuvraj Singh is back to?