Ishant Sharma's verbal duels with the Sri Lankans a "pathetic display of aggression".

New Delhi: Terming Ishant Sharma‘s verbal duels with the Sri Lankans a “pathetic display of aggression”, former India captain Bishan Singh Bedi has said Test skipper Virat Kohli needs to control his own belligerence and be a role model for his players. Ishant played a vital role in India’s series clinching win in Colombo, bagging eight wickets in the match to join the 200 wicket-takers club. But his continuous verbal duels on the field not only cost him 65 per cent of his match fee in the second game but a second offence at the SSC in the third and final Test attracted an ICC ban for one Test match. Scorecard: India vs Sri Lanka, 3rd Test at Colombo

Bedi called it an unfortunate series of events. “See they talked about aggression and then an Ishant gets banned for a match. Is this what you want on a cricket field? This is pathetic display of aggression. And remember this has nothing to do with Virat’s aggression, who is just giving statement after statement and trying to sell his aggression through words,” Bedi told PTI in an interview. Rajkumar Sharma: Virat Kohli wants to change Team India’s culture

“He [Kohli] did a very good job in the context of this series but he needs to control his aggro. There is always one camera which is focused on the captain, so he has to be an exceptionally good role model. You be aggressive with your bat, ball and fielding not with your mouth. These are very early days as far as his captaincy is concerned. There is so much more to be done. And there are far too many lacunas in the Indian team. We would be absolutely blind if we don’t see the shortcomings now,” Bedi said.

In a come-from-behind series win, India registered two comfortable Test victories after losing the opening game in Galle. But Bedi, who congratulated the young team for the win, opined that the visitors were up against a weak opposition and the celebrations that followed were uncalled for. Cheteshwar Pujara, Ishant Sharma among top 20 in ICC Test rankings

“Ye itna bada kaddoo mein teer nahin maara hai [It’s no great achievement either]. If they would have won 3-0 then I would have understood. Ok, now you have won, but what’s the need for this craziness. You had gone there to win, right. So you did what you were expected to do, what’s the fuss all about. Let’s not go overboard for goodness sake. This Sri Lankan team was a very weak side. They should have destroyed them,” said Bedi.

“But a win is a win. I would like to congratulate the boys, but there is no point in the country going berserk over this victory. There has to be some stability in the mind. You lose, you go mad and then you win, you again go crazy. When are we going to mature and accept defeat and victory in a very balanced manner,” he added. Ravichandran Ashwin, Rohit Sharma and Shikhar Dhawan wish Ishant Sharma on 27th birthday

The spin legend praised Man-of-the-Series Ravichandran Ashwin for his consistent showing in the three matches but came down hard on the other bowlers. “Ashwin did a very good job. For the first time I saw him bowl consistently well. But again I would stress that Lankans were a poor unit. I only saw one good knock from Angelo Mathews and that was it. They [the Indians] are going to town about the five-bowler theory. Where are the five bowlers? There is only one bowler that we have,” said the left-arm spinner.

“Yes this team looks good no doubt, but we need young wicket-taking bowlers. See bowlers like Amit Mishra, you can discuss in the present tense, but not in the future tense. It is a young man’s game. But I don’t wish to take anything away from him as he showed a fighting spirit while bowling and batting. Sadly age is not on his side. This was a series where we had to groom and blood youngsters and we failed. And I am not willing to believe that we don’t have young talent. First match they played Harbhajan Singh, now the time is up for Mishra and Harbhajan,” he added. Tharindu Kaushal reported for suspect bowling action

Bedi also questioned the lack of a genuine all-rounder in the Indian team and said that talent spotting is not happening in national cricket. “There is a massive question mark on Stuart Binny and the presence of an all-rounder in the team. Why did they keep Bhuvneshwar Kumar out of the side? Remember you have won, it doesn’t mean that everything is OK. You have got to be very pragmatic and realistic,” he said.

“I am sure there are good spinners, left-arm, leg-spinners around if you look for them. Where is the talent getting spotted? These five selectors, who are taking good money from the Board, need to scout for talent at the grassroot level,” he added. Bedi also insists that the young team should get ready for a tougher test in the upcoming home series against South Africa starting October. “There is a very tough opposition coming home and it’s a very long series where your ability and your fitness would be tested,” he signed off. When Anushka Sharma was congratulated for Team India’s victory over Sri Lanka 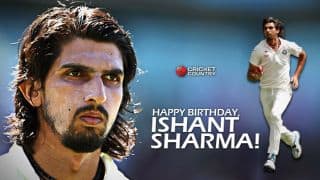