Ishant will be handful in England: Simmons

Ishant will be handful in England: Simmons 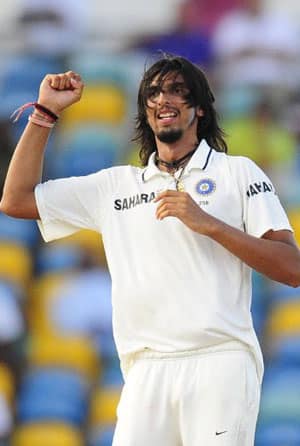 “If he bowls with the control he has got now, Ishant can be a real handful in England. He has obviously got the height.

His ability to get bounce out of a wicket from a fuller length is crucial,” Simmons said.

“He is getting more confident now that his control is back. The no-balls are disappearing. He’s going to start finding the pace that he has. To try and bowl quicker when you haven’t got confidence is not going to work.”

Ishant has already picked up 22 wickets in the ongoing Test series in the West Indies, including two five-for and a ten-wicket haul, at an impressive average of 15.13.

“I think now he’ll start bowling consistently at 140kph, 141, 142, and that’s just going to add to his strength. The only thing is he can drift down leg now and then, but it is a minor issue,” Simmons was quoted as saying by ESPNcricinfo.com.

“He (Zaheer) also understands his body really well. He picks up on niggles very early. At times something could have grown more serious, but he picked it up early and pulled himself off. He has the ability to fix things.

“His break has been a blessing in disguise. He has played a lot of cricket. He went into the IPL from the World Cup.

That must have been difficult,” he said

“Now even Ishant has started to do that. I used to tell Ishant that his front arm was going over, that he was falling over. Now he is fixing things himself,” Simmons added.

“He has the ability to knock over Andrew Strauss during a crucial moment in the game against England at the World Cup, and to take crucial wickets in a Test when the ball starts reversing and the match is going nowhere,” he said.

Simmons also felt that off-spinner Harbhajan Singh, who became the third Indian and 11th overall to take 400 wickets in Test cricket during the ongoing match against the West Indies, is bowling a much better line.

“He is hitting the line outside off. Harbhajan needs to see what the right bowling line is for him. He has the ability to read the situation and decide whether it’s important to attack or to hold,” he said.

Simmons was also effusive in his praise for the overall bowling unit, including S Sreesanth and Munaf Patel.

World sharply divided about Harbhajan Singh's rating as a spinner