It is about executing our skills better, says Steven Smith after 2nd ODI loss vs England

It is about executing our skills better, says Steven Smith after 2nd ODI loss vs England

Defending 271, Australia lost the second ODI to England by 4 wickets.

Australia have lost the first 2 matches of the ongoing 5-match series against England. They have now lost 15 of their last 22 encounters. Steven Smith needs to find answers quickly before his side loses their first ODI series at home since 2010 (versus Sri Lanka). Nonetheless, the problems seem pertinent since the World Cup winners haven’t found the right balance, unlike England.

A dejected Smith spoke about the need of “executing the skills better in key moments” in the post-match conference: “Unfortunately we’re not playing good enough one-day cricket at the moment. You know, I thought Finchy [Aaron Finch] played particularly well (with back-to-back hundreds). We were in a good position at 209 for 3, I think, with 11 overs to go. We only scored 60 with 7 wickets in hand off the last 11 overs. That is not enough against a quality England batting line-up. It was frustrating. Everything fell to pieces again. We lost the two in-batters [Finch and Mitchell Marsh] quickly and two new batters had to go straight away, which was quite difficult. 270 is not good enough.”

Smith has been struggling in ODIs in the recent past, contrary to his astonishing run in Tests. He fell to part-timer Joe Root for a 25-ball 18. Speaking about his rough patch, Smith said: “I think I have a lot of room for improvement. I have high expectations and I haven’t been living up to them. I need to go on with the starts and set the team up.”

In addition, Michael Clarke also called for Smith to take up the No. 4 slot, where he enjoys tremendous success in whites.

Smith, aware of Australia’s poor run, was quick to point out: “In the last 10 games, we have gotten ourselves into reasonable positions but have not taken advantage of them, like today. We were set to get 310-320… then it is a totally different ball game. It is about executing our skills better in the key moments.”

In conclusion, Smith indicated that Nathan Lyon could be making way in the ODI lineup following his heroics in the 2017-18 Ashes and the ongoing BBL: “He’s had an exceptional summer with the red ball and starting to bowl well in the Big Bash so no doubt his name will be talked about.” 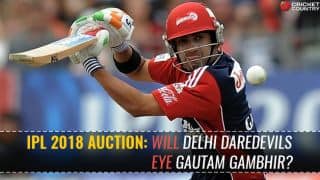