He has scored more than 10,000 runs in international cricket and is India's most successful wicketkeeper with over 200 Test dismissal but skipper Mahendra Singh Dhoni said he is neither a specialist batsman nor an extraordinary wicketkeeper. 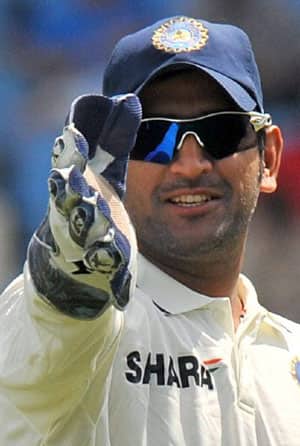 He has scored more than 10,000 runs in international cricket and is India’s most successful wicketkeeper with over 200 Test dismissal but skipper Mahendra Singh Dhoni said he is neither a specialist batsman nor an extraordinary wicketkeeper.

“It’s a big compliment for me. I am more of a package then a specialist. I’m neither an extraordinary batsman nor a specialist keeper,” Dhoni said smilingly when asked to react to Dujon’s comments.

“It’s all about doing the things right. It does not matter how you catch the ball, take the edges and do stumpings. It’s important to score at that point of the time as it’s really good for the side.

“I’m really happy for the compliments. It’s a constant process. I hope to keep doing well and keep grooming the department you specialise. I hope I will be a specialist one day,” he said.

Dhoni has scored 10,363 runs across the three formats of the game and recently surpassed Syed Kirmani to become India’s most successful wicketkeeper in Tests with more than 200 dismissals.

He is ranked seventh in the list of wicketkeepers with highest dismissals. He has 465 scalps to his name.

Dhoni, who has scored 3,386 runs in Tests so far, notched up a Test century after a gap of 21 months and the Indian skipper credited the top-order for putting up a good platform.

“He (Kemar Roach) got me out thrice. It was a good wicket to bat on. From the pavillion end, you had a bit of assistance for the pacers. After a good start, the way Rahul played with Laxman it gave us a position where the lower order comes in and tries to score runs at a brisk pace.

“Initially I tried to play big shots. But it didn’t pay off. Then I gave myself a bit more time and once I was set, we decided the need to accelerate a bit.

“Later on when their bowlers were tired… Bishoo was bowling a negative line around the wicket with Samuels at the other end, we felt this is the time to capitalise and get as many runs possible. We thought it would not be as easy to bat on in the fourth innings. Overall a good innings for me,” Dhoni said.

West Indies were made to follow on after being bundled out for 153 in their first innings as India coasted to an innings and 15-run victory to take an unassailable 2-0 lead in the three-Test series.

The concluding Test will be held in Mumbai from November 22.(PTI)