Sri Lankan umpire Ruchira Palliyaguruge had a lucky escape on Wednesday night. The 49-year-old could have lost his life succumbing to a serious injury, during the Sri Lanka-India T20I, at R Premadasa Stadium. Virat Kohli en route to a match-winning 82 struck a straight shot that missed the umpire by a whisker. Credit goes to Palliyaguruge, who averted the hit by falling on the ground. ALSO READ: Virat Kohli becomes 3rd-highest run-getter in Twenty20 Internationals

It was a lightening strike. I would have tried my hands to stop the ball. I could do that, Palliyaguruge was quoted in a report from PakObserver. There have been suggestions of umpires using helmet in the age of T20s. Australia s Bruce Oxenford uses an arm protector to safeguard himself.

Let other umpires have opinion on using the helmet. I am certain that I will not use helmet. I am fit enough to move out of danger. I work hard everyday to be fit for the job. I go to gym four or five times a week. My cricketing background helps me in anticipation of the ball. Had it been deflected off my body nothing would have happened but had it been caught by a fielder after deflection on my body, Kohli would have been out , the umpire added.

Palliyaguruge was seen sporting a smile after that escape. He was awarded International Umpire of the Year 2015. He was an excellent cricketer at the domestic level, but was unfortunate to not get a national cap. He played 146 First-Class games and scored 4,478 runs at 27.81 and claimed 220 wickets with his medium-pace at under 24. He has a bowling average of just over 24 in List A as well. 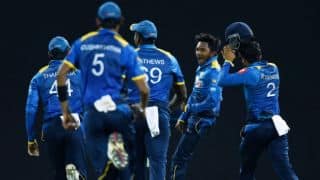