Kohli's comments come after a user said that he is an overrated batsman and that he prefers to watch England and Australia batsmen.

Virat Kohli’s ‘leave India’ comment has created quite an outrage on social media with fans reminding the Indian captain about his comment during the U-19 ICC World Cup in 2008 when he said that his favourite cricketer was former South Africa opener Herschelle Gibbs.

I’m @imVkohli and my favourite cricketer is Harsal Gibs! [2008]

I’m #ViratKohli and i want you to Leave India if you don’t like indian batsmen [2018] pic.twitter.com/OX6i18r9OG

Kohli, who went past Sachin Tendulkar’s record to become the fastest to reach 10,000 runs in the ODI series, was taken by surprise after a user said that he is an overrated batsman and that he prefers to watch England and Australia batsmen.

“Over-rated batsman and personally I see nothing special in his batting. I enjoy watching English and Australian batsmen more than these Indians,” Kohli said.

The BCCI’s top officials don’t seem to be too pleased with Kohli’s recent comments and are undecided whether to take the star batsman to task or not.

“It was a very stupid comment to make. He should have been more careful. He must understand that the kind of money he is earning is because Indian fans have invested in this game,” a BCCI official was quoted as saying by PTI on Thursday.

Virat Kohli’s statement is a reflection of the bubble that most famous people either slip into or are forced into. The voices within it are frequently those that they wish to hear. It is a comfortable bubble and that is why famous people must try hard to prevent it from forming

“But again the comment was made on his private forum or business initiative. He hasn’t used a BCCI platform so that’s also an issue,” the senior official said. 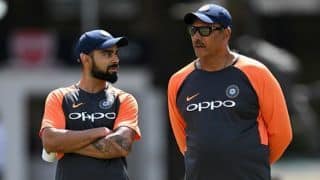