Australia opener Matthew Renshaw is part of the squad for the two-match Test series against Pakistan in the UAE.

Former India skipper Rahul Dravid, one of the most respectable cricketers around the world, never thinks twice to dole out advice to his juniors, even if it means they belong to another country.

Australia opener Matthew Renshaw, who was recently in the country along with the A team, was unavailable for selection for the first four-day game against India A due to a hamstring injury. Renshaw, who s part of the squad for the two-match Test series against Pakistan in the UAE, revealed he sought the India A coach s help for advice. “I spoke to him for a bit and just took away some little things, little gems of wisdom. Someone who’s got over a 11,000 Test runs is someone you want to take as much from as possible. He was always really welcoming and very good with talking to me, Renshaw told cricket.com.au.

“I spoke to him about my ping-pong game being a little bit like Rahul Dravid. I just try to get everything back. I’ll think about doing that in a Test match.”

Renshaw notched paltry scores of 0 and 19 in his return for the second four-day game in Alur, but he s confident of a good show in UAE. “I watched a little bit of footage of my India tour last year,” he said. “Although I got a couple of fifties, there’s still areas I could work on and going big in those series would have helped us.”

“Pakistan have got a new young side, who have been really successful in the white-ball format, so I think they’ll bring a lot of success over to the red ball and it will be a really good challenge in their home conditions. Their spinners are good, but one thing I took out from (last year’s) India series was working a lot more on pace. 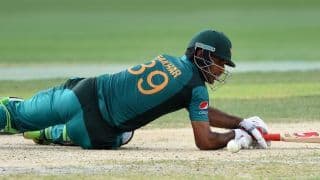