Rohit was particularly pleased with his team s high fielding standards during the T20 series against West Indies.

After a forgettable England tour this year where he managed only 162 runs eight innings and added insult to injury with a highest of just 43 in the seven innings in all formats against the West Indies at home this year, Shikhar Dhawan put an end to his lean patch after his 62-ball 92, his highest in T20I, powered India to a thrilling six-wicket win to clean sweep the series 3-0 against West Indies at the MA Chidambaram Stadium in Chennai on Sunday.

India captain Rohit Sharma was happy to see Dhawan, who has been included in the T20I squad for the marquee series against Australia, among runs before he boards the flight to Oz.

“It was important from the team’s perspective and for the players to get some runs ahead of the important Australia tour. Shikhar especially was batting well in the ODI series, but he was not able to get big scores. I am glad that he could play a match-winning knock and get some form under his belt before the crucial tour,” Rohit said at the post-match press conference on Sunday night.

Dhawan and Rishabh Pant stitched a clinical 13-run partnership for the third wicket to steer India, who were in a spot of bother at 45/2, to victory. Pant scored a brisk 58 off 38.

“Rishabh was also hungry to go out and get some runs. It was the perfect situation. We were two down inside the first six overs. There was a bit of pressure as well. They handled it well and it was a match-winning partnership. It is important in the team’s perspective that both these guys got runs,” he said.

India will three T20Is, four Tests and three ODIs on the almost two-month tour of Australia beginning with the first Twenty20 International on November 21 at the Gabba in Brisbane.

“It is always challenging when it comes to going out there and performing. Every time you go there, you are tested as a player, as an individual and as a team. Australia will be a different ball game,” Rohit said.

“When you win a series like this, you are high on confidence and it is all about taking that confidence there. We have to keep repeating the performances. It is a never-ending story.

Rohit was particularly pleased with his team s high fielding standards during the T20 series against West Indies.

“We ticked a lot of boxes. Particularly, I am happy how we fielded. I think we fielded really well in the tournament. In batting and bowling, there will be mistakes and there will be some good performances,” he said.

Rohit, who has picked in the Test squad for the Australia series, said that he s not thinking about the five-day format.

“I think there is still time before that. We have the T20Is and practice games before the first Test match. I am not thinking about the Test match. I am someone who doesn’t think too far ahead. All I am thinking of is going back, taking a few days off, and take the flight to Australia and prepare for the T20 series,” he said.

“We will have enough time to think about Test matches after that. If I try and stay in present, it works for me. Test matches are something I was looking forward to for a long time and it will be nice to go out there and play a Test match for India.”

The series sweep against West Indies comes as another feather on the cap for Rohit, who also led India to the 2018 Asia Cup title.

“Every game is a new game. Every time I go out there in the middle, I keep things simple. This game is simple, and you need to keep it simple,” he said.

Meanwhile, he praised the elder of the Pandya brothers Krunal Pandya for his fearless attitude.

“Krunal is a street-smart cricketer who is never afraid of any doing stuff on the field. I am impressed with how he approached these three games. He has got great ability to play for India for a long period of time.

“He is fearless like his brother [Hardik]. At the end of the day we need characters in the team. You need players like Hardik, Krunal who are not afraid to express themselves,” he said.

Asked about the absence of MS Dhoni behind the wickets, Rohit said: “MS [Dhoni] was not part of the Nidahas Trophy in Sri Lanka also. MS not being in any team is a big miss. His presence in the team itself is a huge boost for a lot of the players, not just me, especially the younger players.” 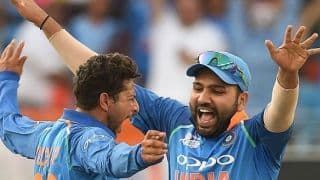