"It's not a Day One wicket", were Australian all-rounder Steven Smith's first few words after the visitors once again struggled to come to terms with the Indian spinners on a crumbling Feroz Shah Kotla track at Delhi on Friday. 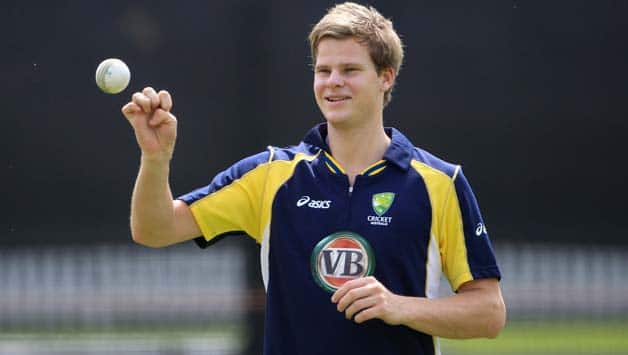 Speaking about the Delhi pitch, Steven Smith said it is not a typical Day One wicket that he is used to playing on © Getty Images

“It’s not a Day One wicket”, were Australian all-rounder Steven Smith‘s first few words after the visitors once again struggled to come to terms with the Indian spinners on a crumbling Feroz Shah Kotla track at Delhi on Friday.

The pitch had been termed a “three-day wicket” by former players for having plenty of cracks even before the match had begun.

“It’s not the Day One wicket I am used to playing on. It has broken up pretty early. It will get tougher and tougher to bat throughout this match,” Smith told reporters at the post-match press conference.

Smith cited the example of fellow batsman, Philip Hughes, who got a vicious delivery in the 21st over from pacer Ishant Sharma that hit the grill of his helmet.

The ball was slightly short of length and hit Hughes’ helmet, forcing him to take evasive action.

“It’s not too often we see on the first day of a Test match the ball going like that and hitting a player in his grill. That’s probably shaken him up; it also shaken me up. If we talk about Hughes, he was very good on Friday. He came out with a positive mind-set and found his way over here,” he said.

Smith, who made a defiant 145-ball 46, said the visitors would look to add another 50 runs on Saturday to their first-innings total of 231 for eight.

“231 at the end of day one is not bad day for us. Hopefully, we can add another 50 runs to our score on Saturday. It’s going to be a competitive first-innings score,” he said.

“Spin has played a good role on this wicket. It’s pretty tough to score runs a lot of times. Every one of their bowler bowled well today. Their field setting was good. The wicket has already worn out. If we could grind out another 50, it would be good for us,” he said.

Asked about the top-order failure, Smith said, “All the guys have worked very hard, had their game plans. [But] in these conditions, it’s tough to bat. Sometimes your game plans do not work.”

Talking about his own innings of 46, Smith said he spent a lot of time in the nets to prepare for the final Test.

“I spent a lot of time in the nets. It’s about surviving first and then scoring runs. For me, it’s about watching the ball as hard as I can and then play my shots against the spin,” he said.

The Aussie said it became difficult to bat when spin was introduced into the attack.

“The first couple of overs is the easiest time to bat on. When spin comes into play, that’s probably the toughest period. As the ball gets little bit softer, it becomes little bit easier for us. The more balls you face, it becomes easier for you. I think that’s one thing we need to take from this tour. Try to find a way to play as many balls as you can and then it does get easier,” he said.