Itching to Get Back to Playing Cricket: Rohit Sharma During Covid19

Itching to Get Back to Playing Cricket: Rohit Sharma During Covid19

Rohit Sharma said that he was running up and down the stairs to stay fit. In the wake of the 21-day lockdown clamped in India to curb the coronavirus spread, India opener Rohit Sharma on Thursday said that he was itching to play cricket. ‘Hitman’, as he is popularly called, said that he was running up and down the stairs to stay fit.

“Its very hard actually (to stay fit),” said Rohit in a live interaction on Instagram with former England captain Kevin Pietersen. “I live in a building which has about 54 floors and we had to stop all the indoor and outdoor activities. So just been running up and down the stairs. Not 54 floors but about two or three floors up and down and doing some conditioning exercises here and there.”

Rohit had been recovering — from a calf injury which he sustained during the fifth T20I between India and New Zealand — at the National Cricket Academy (NCA) in Bengaluru before it was shut down due to the spread of the pandemic.

He, however, said that he is completely fit now, although he is yet to do an official fitness test because the NCA is not working.

He said that he has been itching to play the game again after spending two months on the sidelines and was looking forward to the IPL.

“Definitely miss playing the game. I was injured for two months so I have been itching to play. When I got the news that everything was going to be postponed I was very sad. I was really looking forward to playing in the IPL,” he said.

Rohit”s Mumbai Indians were scheduled to host Chennai Super Kings in the first match of the 2020 season of the IPL on March 29 at the Wankhede Stadium but the start to the season has been deferred to April 15 due to the coronavirus outbreak. 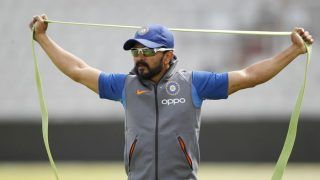 Would have closed my eyes batting against you: Pietersen trolls Yuzvendra Chahal