Kuldeep Yadav accepts it's a challenging proposition to bowl with the red ball and is aiming to replicate his limited-overs success in Test cricket.

A cursory glance at Kuldeep Yadav‘s limited-overs and first-class career is enough to reveal the sharp contrast in his performances. While he averages 21.08 and 20.22 in List A and T20s respectively, that average zooms to 32.36 in first-class cricket.

In his brief but impressive limited-overs career at the international level, the left-arm spinner has established himself as a dependable strike-bowler. The same cannot, yet, be said about his Test career. Though, it’s a little to early to judge how he has fared in Tests considering he has only played three of those since making his debut in March 2017.

While he has enjoyed success in ODIs and T20Is, the opportunities to play red-ball cricket at this stage have been scant. The third of his Test came at Lord’s last month when he delivered nine wicketless overs for 44 runs. After that, he was released from India’s Test squad to play for India A against Australia A to get to adjust his mindset to the rigors of the format.

Kuldeep accepts it’s a challenging proposition to bowl with the red ball. “For me, it’s very challenging to bowl with a red ball,” Kuldeep told reporters in Bengaluru on Tuesday where he is playing for India A in an unofficial Test against the visiting Australia A. “When you play with white-ball regularly and suddenly get selected for the Test team, it gets difficult.”

“I spoke to MSK [Prasad, chief selector] sir and Ravi [Shastri] sir. They wanted me to play a lot of cricket. I went there [England] and played one Test match. It was likely that only one spinner would be able to play over there so there wasn’t much of an opportunity there. Here I had the opportunity to play. There was no advantage to sitting on the sidlelines,” the 23-year-old was quoted as saying by ESPNcricinfo.

Next month, West Indies are set to tour India for two Tests, five ODIs and three T20Is. So, the ongoing unofficial Test series against Australia A is his best chance to stake a claim in India’s Test XI for the Windies tour.

To do that, he is searching for his rhythm and has found some success in that regard. ” the conditions and the ball [Dukes] is different in England. But after coming here and bowling more than 30 overs, I would say, I am getting my rhythm back. I m enjoying bowling in the longest format now.”

It’s just not that Kuldeep has been getting game time in first-class cricket regularly. His last Test for India, before the Lord’s, was in August 2017 and between those two fixtures, he did not play a single red-ball game.

But Kuldeep is now making the most of the opportunity. He’s learning the tricks and the importance of patience. “It’s always difficult to switch to a different condition. As a bowler, in limited overs, you can try different things in four or 10 overs you get. In the longest format, it’s completely different. You have to bowl to a specific line and length for a sustained period of time rather than trying out different variations. Last time I bowled more than 10 overs was against Sri Lanka at Kandy.” he said. 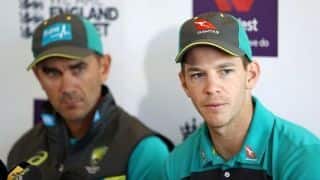