The story of how Don Bradman fell four runs short of ending his Test career with a surreal average of 100 is the stuff of legend. Eric Hollies, the England spinner, bowled Bradman for a duck in what was to be his final Test innings.

England had been skitted for 52 in their first innings of the fifth and final Test and Australia replied with 389. With England being bowled out for 189 in their second dig, the visitors won by an innings and 149 runs.

However, another Australia legend Neil Harvey feels he was equally ‘guilty’ of denying Don the magical landmark. In the fourth Test of the tour, at Leeds, with Australia needing four to win, Harvey came in to bat at No. 4 after the dismissal of Keith Miller. Batting alongside him was Bradman, unbeaten on 173.

Harvey smacked the first ball-faced for a four to seal the deal. At that time, nobody was aware of the fact that Bradman was four runs shy of averaging 100 in Test cricket.

70 years after that famous incident, Harvey is still living with the regret. “That four at Leeds makes me feel very guilty,” Harvey was quoted as saying by Stuff.co.nz on Sunday. “It’s entirely my fault Bradman didn’t average 100 in Test cricket. If he had’ve scored those four runs instead of me, he’d have got there.”

Statistics dominate every conversations in cricket today. However, back in those days, they were rarely mentioned and Harvey says despite nobody being aware of the incredible feat Bradman was so close to achieve at that time, he’s ready to take the blame.

“I went in and Ken Cranston, a seam bowler from Lancashire, bowled this thing on my leg stump and I whacked it through mid-wicket for four,” Harvey said. “The public charged onto the ground and I can still remember Bradman yelling, ‘come on son, let’s get out of here’.”

The duck meant Bradman finished with 6996 runs from 52 Tests and average of 99.94 with 29 centuries and 13 fifties. “Statistics were never mentioned back then; there was no television and no one in the press seemed to know. When the poor bloke was bowled that was it. He wasn’t going to get another chance because we dismissed England for 52 in their first innings,” the 89-year-old said. 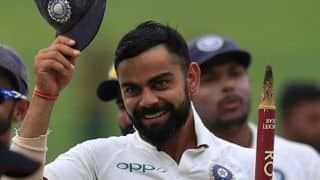