Marsh, 35, was axed from Australia's Test team last summer after a barren series with the bat against world No.1 side India.

Australia batsman Shaun Marsh believes that his Test career might be over with the new crop of players cementing their places. Marsh, 35, was axed from Australia’s Test team last summer after a barren series with the bat against world No.1 side India. He was subsequently not picked against Sri Lanka in the following series.

“It is highly unlikely now with the guys coming in and performing how they did against Sri Lanka,” Marsh told The Courier Mail when asked if he feels he will play another Test. “I had a crack at it. They gave me every opportunity to get it right over the last 12 months after the Ashes when I played really well.

“Unfortunately, it did not work out for me but the guys who came in did well and probably deserved a crack at the (2019) Ashes,” he said.

Marsh has featured in just 37 Tests since 2011 due to poor form and injury. “I just did not manage to find the consistency that good players have,” said Marsh, who has scored six Test centuries and 10 ducks.

“I just did not have that throughout my career. Look, I am still really proud of what I achieved. I played Tests for my country and played in some wonderful series wins. There were some lows, but also some great highs which I will cherish forever.” 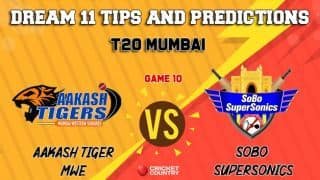 Dream11 Prediction: AT vs SS Team Best Players to Pick for Today’s Match between Aakash Tigers MWS and Sobo Supersonics at 7:30 PM SS vs AT, Match 10, T20 Mumbai, LIVE streaming: Teams, time in IST and where to watch on TV and online in India