Virat Kohli on Wednesday scaled another peak by becoming the fastest to 10,000 runs in ODI cricket.

Virat Kohli on Wednesday scaled another peak by becoming the fastest to 10,000 runs in ODI cricket, surpassing the previous record held by batting legend Sachin Tendulkar.

Kohli reached the milestone in only is 205th innings, 54 less than Tendulkar who is the first to the landmark in ODIs.

Kohli went past him in record time during the second ODI against West Indies in Visakhapatnam on Wednesday when he got a single towards long-on in the 37th over. He follows Tendulkar, Sourav Ganguly, MS Dhoni and Rahul Dravid as the fifth Indian to 10,000 ODI runs and is the 13th batsman overall.

To give you an idea of how much better Virat Kohli is than other great ODI players: him scoring 10,000 ODI runs in 205 innings 54 faster than the next best is proportionately equivalent to breaking Usain Bolt’s 100m record by exactly 2.00 seconds (100m in 7.58 seconds). #INDvWI

Exactly why he is the !! #Fact https://t.co/oE1vhsZtAq

Congratulations to @imVkohli to achieve milestone of 10000 runs in ODI cricket , Great player & Humble human , u entertaining all fans of cricket with ur Skills , Passion & determination , stay blessed

ODI runs and in no time!! Congratulations on the record @imVkohli #Virat10k

Well done @imVkohli on becoming he fastest man to 10,000 runs What is next on your list to off? #INDvWIN

Just to put his performance in the perspective, the most runs any one else has scored after 205 innings are 9,080 by AB de Villiers.#INDvWI

List of records Virat Kohli will have in his name when he retires. pic.twitter.com/IA15DoRcXG 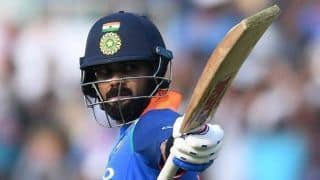