India captain Virat Kohli said India should be "better than that" after an innings and 159-run hammering by England in the second Test at Lord's on Sunday.

India captain Virat Kohli said India should be “better than that” after an innings and 159-run hammering by England in the second Test at Lord’s on Sunday.

The heaviest defeat of Kohli’s reign as India captain was completed after tea on the fourth day, with his side now 2-0 down in a five-match series.

Yet in a fixture marred by rain — Thursday’s first day was completely washed out — India were effectively defeated inside two standard days’ playing time.

Their batsmen were left helpless as Joe Root’s attack, led by spearhead James Anderson, made the most of the overcast and typically English swing-friendly conditions, with India dismissed for just 107 and 130.

Significantly, India’s two innings were completed in 82.2 overs, while England batted just the once while making 396 for seven declared in 88.1 overs.

India, for all they are number one in the Test rankings, have long faced accusations they are ‘lions at home and lambs abroad’.

In the past five years, they have won just one of their six previous Test series outside of Asia — and that was against a struggling West Indies.

Meanwhile this latest reverse meant India had won a mere six of their 59 Tests in England.

There is no doubt modern fixture schedules often conspire against touring teams.

Nevertheless, the Board of Control for Cricket in India (BCCI) agreed to a programme where Kohli’s men had a solitary red-ball warm-up match against Essex ahead of five Tests in some six weeks.

And on the eve of the Essex fixture, long-agreed as a four-day game, the match was reduced to a three-day game at India’s request.

But regardless of scheduling concerns, Kohli said India had to improve on a Lord’s batting display where number eight Ravichandran Ashwin, primarily an off-spinner, top-scored in both their innings with 29 and 33 not out.

“It’s our job and our duty to play for the country, and we should be better than that,” insisted Kohli, the number one-ranked batsman in both Tests and one-day internationals.

“Unless you accept that, you can’t improve and compete. We have to accept what we did wrong — mistakes have been made — and not repeat them again.”

He added: “Credit has to go to England who were clinical with the bat, ball and in the field. They deserved to win and we deserved to lose.”

Kohli was clearly struggling with a stiff back on Sunday, the injury seeing him bat at number five rather than his usual number four position.

And he received prolonged on-field treatment before he was dismissed by Stuart Broad for 17.

“As of yesterday (Saturday) it was not great,” said Kohli, who scored 200 runs including an innings of 149, his maiden Test century in England, during India’s 31-run defeat in the series-opener at Edgbaston.

But Kohli was optimistic he would be fit for the third Test in Nottingham starting Saturday. “The back is one thing that can be very tricky…but the good thing is I have five days before the next Test,” he said. “We are confident I should be ready.” 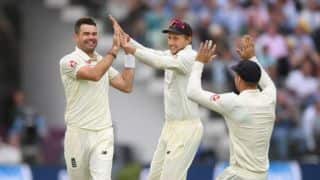