Centurion in the first innings, South African all-rounder Jacques Kallis is now ready to rotate his arm and contribute with the ball as well. 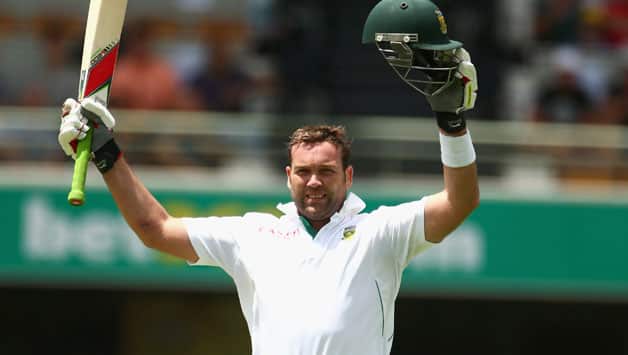 Centurion in the first innings, South African all-rounder Jacques Kallis is now ready to rotate his arm and contribute with the ball as well.

He said. “I’m ready to go. It’s managing the workload as well, just got to be careful with that, but as far the body goes, it’s alright for the moment.”

Kallis scored 147 runs to guide the visitors to 450 runs at the Gabba and also took two catches of David Warner and Ricky Ponting in the slip cordon as Australia were reduced to 111 for the loss of three wickets at the close of Day Three.

Kallis was involved in a 165-run partnership for the third wicket with Hashim Amla. The all-rounder said he was satisfied by his batting performance.

He was quoted by DNA as saying, “I’m happy with the way I played. It was tough this morning. I thought Oz bowled really well and got the ball into good areas. “I think I’ve been playing pretty well for the last couple of years.

“I feel I’ve been getting into good positions. Hopefully I can carry on that, and you need a little bit of luck to go with that as well. Long may that continue.”

Kallis feels getting the early wicket of Australian senior batsman Ponting was a key moment on Day Three.

He said, “Nice to get a guy like him out early, he’s one of the best players in the world and we need to keep asking questions of the Australian top order.

“If we can nip out a couple tomorrow morning and put some real pressure on Australia, who knows? I think we’ve just got to give ourselves opportunity, I think the game’s far from dead.”