South Africa went into lunch on Day Four of the second Test against India at 395 for seven.

Jacques Kallis scripted a fairytale at Durban as he scored his 45th Test ton in what is his final Test of a glitering career. South Africa went into lunch on Day Four of the second Test against India at 395 for seven.

The day began with overcast skies around Kingsmead and it was quite surprising that the stands were empty. All eyes were on Kallis and it was quite obvious. South Africa resumed on 299 for five with Kallis on 78. Mahendra Singh Dhoni continued with Ravindra Jadeja as he was getting turn and employed his fast bowlers in turns at the other end.

It was largely an attritional game early on as the runs were hard to come by and both batsmen only picked a few singles. Kallis came closer and closer to his ton and the sparse crowd were up on their feet. There was a minor hiccup though as Kallis and Dale Steyn had a mix-up, but both made their ground safely. In between overs, both had a hearty laugh about it.

It was quite surprising that Dhoni continued with the old ball as he could have opted for the newer one with the overcast conditions around. Kallis moved into the 90s with a cracking cover-drive for four and when Jadeja shot one near his legs, he worked it fine to move closer to the milestone.

One could sense the nervousness at Kingsmead. The South African dressing room didn’t move. After defending a few, he finally worked Jadeja to the leg-side and set off for the single and got to his milestone. The helmet came off and the bat pointed to the dressing room. It was a moment that would be etched in memory forever. If only there had been a bigger crowd.

Kallis did move past Dravid, but then lost his wicket as he attempted a sweep across the line. Instead, he got a top edge and was caught by Dhoni to give Jadeja his fifth wicket. Soon after, Steyn was dismissed when he chased a widish one from Zaheer. 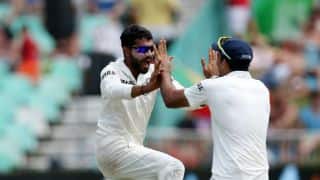