Kolkata: The body of BCCI President Jagmohan Dalmiya, who passed away following a massive cardiac arrest here, was on Monday brought to the Cricket Association of Bengal office here to let people pay their last respects to the administrator. Dalmiya’s last journey began from his 10 Alipore residence at 12.15pm. Indian cricket Team Director Ravi Shastri and and BCCI bigwigs including Secretary Anurag Thakur and CAO Ratnakar Shetty were among those who lined up to pay homage to the administrator. Dalmiya’s body arrived at CAB office in Eden Gardens at 12.50pm where dignitaries including media baron Subhas Chandra paid their last respects to the former ICC President, who breathed his last on Sunday. Haroon Lorgat: Jagmohan Dalmiya was an iconic administrator

The 75-year-old Dalmiya, who was admitted to the city’s B M Birla Hospital on Thursday night, is survived by his wife Chadralekha, daughter Vaishali and son Abhishek. “He was a dynamic personality and a true sport administrator loved by everyone in India and abroad. He was a visionary leader and a great sports administrator. He will be remembered for bringing in reforms to the game of cricket,” said Thakur after paying his last respects. Chandra lauded Dalmiya for bringing in money into the game. “He not only popularised Indian cricket but world cricket.” Jagmohan Dalmiya’s dedication, commitment was praiseworthy, says IS Bindra

This game has suffered a great deal due to his absence. He not only brought wealth to Indian cricket but also to global cricket. ICC didn’t have even USD 1000 in its coffers but when he left he brought millions and billions of dollars to ICC,” he said. “I don’t think we have someone who can match up to his legacy, it’s the saddest day in cricket history, a big loss which would be hard to fill,” he added. The body will be kept at CAB for a couple of hours before the cremation takes place at around 3pm with full state honours. Several other top BCCI officials and dignitaries are expected to arrive in the city to pay their last respects to Dalmiya. 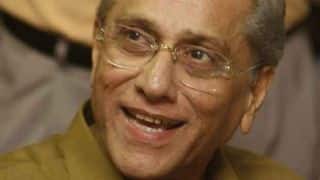