James Anderson has admitted he may have played his last for England in limited-overs cricket, but added that he would still want to play in the ICC World Cup 2019. Anderson s last appearance in One-Day International (ODI) cricket was in the ICC World Cup 2015 match against Afghanistan, while he has not played T20 Internationals since 2009. The 34-year-old seamer, who missed two out of five Tests in India late last year due to fitness issues, however, hopes to play white-ball cricket for Lancashire in the English season that began on Friday. In 194 ODIs, Anderson has claimed 269 wickets whereas in 19 T20Is, he has 18 scalps.

Anderson told ESPNCricinfo, “I’m going to play 50-over cricket for Lancashire in May. The way the season is mapped out, to have the month of May off completely would be foolish. It wouldn’t help me at all. So I’m playing two out of the first three Championship games and then I’ll reassess. I’ve kind of made peace with the fact that I probably won’t play again. In my head I’d still like to because I think although I’ve had injury problems over the last twelve months I could still get to that World Cup in 2019.

Anderson backed his bowling partner Stuart Broad to make his way back into England s limited-overs side. “But the way the team has moved on in the last 18-months, it would probably not be the way they’re looking at the team for me to come back in. Stuart Broad coming back in would make sense; because it looks like the bowling attack needs that senior figure. He’s only 30 and he could make it to the World Cup quite comfortably.”

“I can’t bowl 90 mph any more like I used to,” admitted Anderson, who has taken most wickets in Test cricket for England. 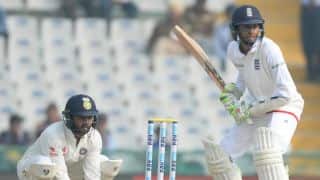