Anderson is the only Englishman to 400 and 500 wickets in the longest format.

James Anderson became the first England cricketer to 800 wickets across formats. He stretched his tally to a new high during the second Test of the 2017-18 Ashes. He made Peter Handscomb his 800th victim on Day Four.

Anderson had taken a mere wicket in the first innings, dismissing Usman Khawaja with an away-swinger. However, he has been on a rampage in the second innings. In the last session of Day Three, Anderson had Cameron Bancroft caught behind with an absolute peach of a delivery. In the same spell, he produced another snorter to have Khawaja trapped in front.

Anderson continued the good work in the first session of Day Four as well. He sent Nathan Lyon and Handscomb packing in quick secession.

Note: This report was published when Anderson reached the milestone. Australia were 76 for 5. The numbers mentioned, of course, will change. 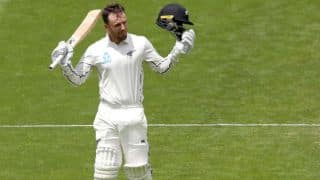