McGrath feels there is no reason why Anderson can t go onto pick up another 36 wickets.

Former Australia fast bowler Glenn McGrath has backed James Anderson to breach the 600-wicket mark in Test cricket, adding that the England pacer looks fit enough to get to where only three bowlers have in international cricket. Anderson, on Tuesday, surpassed McGrath s tally of 563 Test wickets by bowling out Mohammed Shami to become the most successful fast bowler in Test cricket as England beat India by 118 runs in the final Test at The Oval. With the win England secured a 4-1 finish to the series.

McGrath, who retired in 2007, feels there is no reason why Anderson can t go onto pick up another 36 wickets that will make him the first fast bowler to 600 Test wickets.

“Just to see Jimmy now, he looks fit and keen and running around, it depends on what he wants to do. If he can raise the bar to 600 wickets, that’s an incredible effort,” McGrath told BBC Sports.

“I was proud to hold it for as long as I did – for it to be beaten by somebody like Jimmy Anderson is great. I have a lot of respect for Jimmy. He’s been an incredible bowler for a long time. To have played well over 140 Tests and just keep running in, day in, day out, and remain at the top of his game, yeah, I’m very proud Jimmy’s got there.”

McGrath acknowledged what Anderson has done is no mean feat considering fast bowling is the most difficult discipline in cricket. With numerous injuries cutting short careers, the way Anderson has managed his body is worth admiring.

“You always wonder whether anyone’s going to get there,” said McGrath. “There were probably two guys I thought about – one was Jimmy and the other was [South Africa’s] Dale Steyn.

“Being a fast bowler is the toughest part of the game and injuries do play a part. To think that Jimmy’s played for so long and continued at the top of his game shows his work ethic, his physical and mental strength and everything else that goes into it.

Anderson has been a wonderful exponent of swing bowling, one that is no longer common in international cricket. According to McGrath, Anderson shares that trait with the great Wasim Akram, despite there being certain areas where he stands as compared to the Pakistan great.

“When it comes to the art of swing bowling, there is no-one better. I think of somebody like Wasim Akram, who is one of the greats of all time, and he could just do anything with a ball. Wasim swung it both ways, was a left-armer and had power through the crease,” McGrath said.

“Jimmy is different. He’s taller and right-handed, but the way he swings a ball – both ways at will – is is what sets him apart. It’s definitely an art form and when the conditions suit – like they often do at Lord’s when it’s overcast and the ball is swinging – no-one comes close to him.

“Most guys hit the deck, get the ball in the right area and hope for a little bit of swing. We don’t see people with the skills of Anderson too often.”

McGrath had earlier mentioned that Anderson s record will stand the test of time. Reiterating that point, McGrath said the reason behind that is the rapidly-changing nature of the game. With an increasing likeness towards T20 cricket and more fast bowlers getting prone to injuries, it is highlight unlikely that the 36-year-old s feat will ever be broken.

“If there is anyone out there, they have got a long way to go,” he said. “I don’t think we’ll see it happen in the next decade. Just to play enough games to get anywhere near it is tough in itself. Other than Jimmy [143 Tests], no other fast bowler in the history of the game has played more than 132 Tests [Walsh].

“Also, the nature of cricket these days is that there is so much more Twenty20. The game is quicker, it’s faster. And will bowlers play enough Test cricket in the future to get anywhere near the mark?” 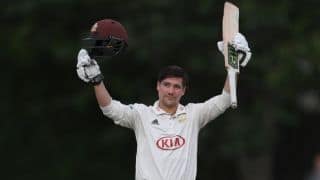 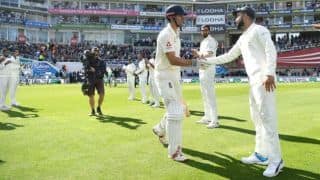