Anderson registered his 16th five-wicket haul on the fourth day of the ongoing third Test.

James Anderson completed his 16th five-wicket haul, in the third Test match against India at the Ageas Bowl in Southampton on Thursday. England bowled out India for 330, taking a huge 239-runs lead in the first innings. England would now be pushing for a win having being in complete command so far in the Test.

India captain Mahendra Singh Dhoni was 50 not out and Mohammed Shami four not out. Broad, who had looked tired for much of this series while struggling with a knee injury, appeared to have regained his old zest while taking three for 65 in 23 overs. 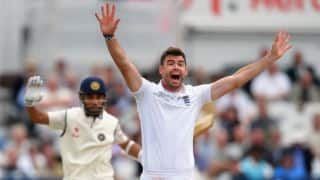 India bowled out for 330; England to bat again in third Test at Southampton