With so many Twenty20 (T20) leagues cropping up, giving immense support to emerging players, England pacer James Anderson came out in full support of Test cricket. Anderson also explained that Test cricket has always been his priority and working to get better with it and denied that no T20 franchises are eager to sign him up. “Test cricket still excites me. I prioritise it in my head and my heart. It is what I will concentrate on doing for the foreseeable future,” Anderson said. LIVE FULL SCORECARD: South Africa vs England, 3rd Test at Johannesburg

As reported on CricBuzz, Anderson believes T20 leagues can pose threat to Test cricket but players still love to play for their country in the white jersey. The speedster also hopes for fans to support the longest format of the game. “There is a slight worry with the domestic T20 competitions doing so well. But speak to players and there is a still a passion to play Test cricket. It’s a real test of someone’s character and skill, to perform in this form of the game. Hopefully it’s not just players but fans too, because we need people to keep supporting the game so that it does flourish,” he said. ALSO READ: James Anderson to offer valuable advice to Stuart Broad during 1st Test against South Africa

Anderson is the most successful Test bowler for England so far, having bagged 426 Test wickets with an economy of 3.02 and it could be easily anticipated that the team’s bowling attack would definitely miss their most experienced and dependable bowler. Anderson had missed first Test against South Africa at Durban due to injury. England will play 3rd Test against South Africa on Thursday at Johannesburg. 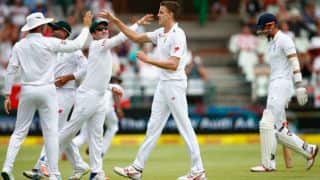 When an angry Mitchell Johnson bowled bouncers at Phil Hughes