England left James Anderson out of their 12-man squad announced Sunday for the third and final Test against the West Indies at Edgbaston starting on Thursday. 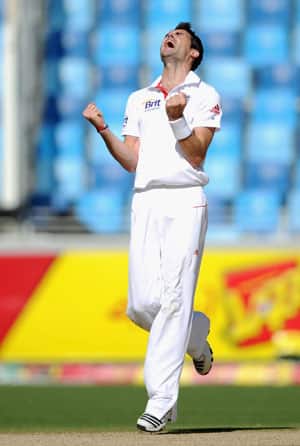 England left James Anderson out of their 12-man squad announced Sunday for the third and final Test against the West Indies at Edgbaston starting on Thursday.

The England selectors insisted the 29-year-old Lancashire star was being omitted to “overcome several minor injury niggles” rather than being rested on grounds of squad rotation.

However, in a move that could cause a rift between the England hierarchy and their leading bowler, Anderson himself insisted he was fit to play in his Sunday newspaper column.

Seamers Steven Finn and Graham Onions, yet to feature in the series but included in 13-man squads ahead of five-wicket and nine-wicket wins at Lord’s and Trent Bridge respectively that have given England an unbeatable 2-0 lead in the series, will compete to fill the place left vacant by Anderson’s absence.

However, England could play both bowlers were they to rest Anderson’s regular new-ball partner and Twenty20 captain Stuart Broad.

An England and Wales Cricket Board (ECB) statement said Anderson had received treatment during the second Test at Trent Bridge for a minor quad problem.

It added that missing the final Test would give Anderson, whose tally of 267 wickets in 70 matches leaves him fifth in the list of England’s most successful Test bowlers, time to overcome “several minor injuries”.

Anderson has missed just one of England’s past 25 Tests, since he was rested from the 2010 tour of Bangladesh, and national selector Geoff Miller said his omission had been in the “best interests” of the bowler.

“James Anderson will miss this Investec Test as we look to manage his workload ahead of a busy period of cricket this summer and beyond, a decision which is in the best interests of the team and James himself,” Miller said.

But Anderson, in his column for the Mail on Sunday, published before the squad was made public, said: “It would be extremely disappointing for me to miss out.

“Resting players is going to happen more and more often as the schedule gets busier and the ECB has been excellent at monitoring players to keep them fit and ready.

“Sure, this series has been hard work — back-to-back Tests always are; that’s what we are used to and have to deal with the world over. But five days of rest is more than enough to be ready to play again.”

England have a packed home international programme, with South Africa set to challenge them for the world number one Test ranking. They also face one-day series against the West Indies and Australia before taking on the Proteas.

Meanwhile Yorkshire middle-order batsman Jonathan Bairstow, two matches into his Test career, retained his place for Edgbaston despite struggling against the short ball at Trent Bridge.

But West Indies fast bowler Kemar Roach, his main tormentor at Nottingham, was ruled out of the rest of the tour with a shin injury earlier this week.

Former England off-spinner Miller said the series had been tougher than the scores suggested.

“We have been made to work hard for our two victories so far and are delighted to have secured the series, however we know that we will need to continue to play some good cricket if we want a third win against the West Indies this week.”