England fast bowler James Anderson is worried that test cricket is losing popularity as attendances for the longer format are declining.

Bengaluru: England fast bowler James Anderson is worried that test cricket is losing popularity as attendances for the longer format are declining, with younger crowds preferring to watch Twenty20. Anderson, England’s all-time leading test wicket-taker, said the launch of Twenty20 – the first international was in 2005 – and its growing young fanbase had hit crowds for test matches. “There is a concern. I think if you look at attendances around the world, in test cricket they’re on the decline and it’s probably only in England that we sell out most days for test matches,” the 34-year-old told Sky Sports on Wednesday. Amul s take on James Anderson s controversial comments on Virat Kohli is hilarious

“Obviously, it’s great to see Twenty20 the way it is, drawing crowds and getting young kids into the sport, but there are still a lot of players out there who want to play test cricket and see it as the pinnacle. In the future, it’s something that has got to be looked at,” he added. Anderson, recovering from a shoulder injury, is set to join Lancashire on the county circuit for the next three months before England host the first test against South Africa in July. Earlier, Virat Kohli s childhood coach Rajkumar Sharma termed James Anderson s comments about the batsman s technique as immature advising him to concentrate on his own performance.

Kohli scored his career-best 235 in Mumbai Test which India won by an innings and 36 runs but Anderson said that any technical deficiency that the Indian captain is not in play because of the pitches. This is a childish statement from Anderson. What has he done in the matches that he has played? He is also not getting wickets in India. He may be a good pacer but he has to also take wickets in India. Taking wickets in England can t be a parameter to term someone great, Sharma told PTI Bhasha. 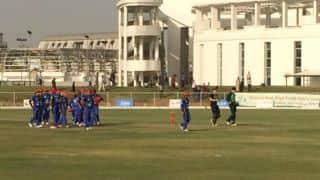 Scotland to host Zimbabwe for 2 ODIs