James Anderson returns to top 3 in Player Rankings for Test bowlers after England vs Sri Lanka, 1st Test at Headingley

James Anderson returns to top 3 in Player Rankings for Test bowlers after England vs Sri Lanka, 1st Test a

Anderson's teammate Jonny Bairstow has earned him a career-best ranking as a Test batsman.

James Anderson has returned to top three of ICC Player rankings of Test bowlers after a stellar performance in the first Test between England and Sri Lanka at Headingley that ended inside three days. Anderson is at No. 3 behind the Stuart Broad and Ravichandran Ashwin. Anderson bagged 10 wickets in the Leeds Test to give England a lead of 1-0 in the two-match Test series with the second match scheduled to be played at Chester-le-Street from Friday. Anderson and Co helped England thrash Sri Lanka by an innings and 88 runs in the opening Test. The same game saw 26-year-old Jonny Bairstow scored his second Test century which has earned him a career-best ranking as a Test batsman. Full Cricket Scorecard: England vs Sri Lanka 2016, 1st Test at Headingley Day 3

The Test player rankings will now be updated following the Durham Test, which begins on Friday, 27 May. The wicketkeeper-batsman scored 140 and shared a stand of 141 runs with Alex Hales for the sixth-wicket which lifted a struggling England from 83 for 5 to 298. Bairtsow was rewarded 84 points for his show that has lifted the 26-year-old Yorkshireman 14 places to 22nd spot in the latest rankings.

According to a media release from ICC, Joe Root has retained his second place behind Australia captain Steve Smith, but the pre-Test 36-point gap has now opened to 49 points after Root failed to score any runs. He is now just eight points ahead of New Zealand captain Kane Williamson.
Rival captains Angelo Mathews and Alastair Cook both failed to hold on to their places and have slipped one position each to ninth and 15th respectively. 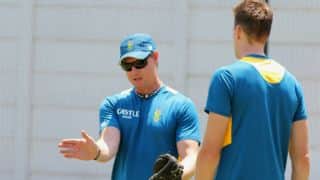