The first Test between England and South Africa is set to begin on December 26.

James Anderson has been ruled out of the Boxing Day Test against South Africa at Durban with a calf strain. England’s leading Test wicket-taker was rested for the warm-up match against South Africa A this week and has bowled just five overs on the tour. Anderson was sent for scans on Tuesday after he had complained of tightness in his right calf muscle and English coach Trevor Bayliss had suggested the situation to be a concern for England ahead of their 4-match away Test series against South Africa starting on Saturday. According to BBC, two from—Steven Finn, Chris Woakes, Chris Jordan or Mark Footitt—will join Stuart Broad in England’s attack. FULL SCORECARD: South Africa vs England, 1st Test at Durban

Anderson was experiencing the soreness in his calf since the start of the tour and he had bowled only five overs, in a 13-a-side first Tour match against a South Africa Invitational XI last week. The pacer has been suffering from multiple injuries since Australia toured England for the 2015 Ashes. Anderson, with 426 wickets in 110 Tests, missed the final two Tests of England’s Ashes triumph over Australia this summer with a side strain. The gap between the first and the second Test will play the decision-maker for Anderson’s availability in the remainder of the series.

Meanwhile, Joe Root, England’s vice-captain, is assured that his side can beat the world’s number one Test team away. Being aware that it is a challenge to play against South Africa, he has urged his team to play extremely well in order to win the series. Bangladesh vs Zimbabwe 2016: Test series likely to be held in January 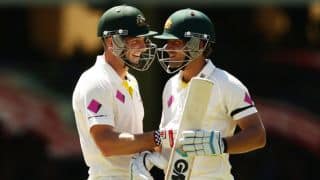