With just three weeks remaining for The Ashes 2017-18, England pacer James Anderson has opened up about their preparations. Anderson specifically spoke about the pink Kookaburra ball that behaves differently from Dukes.

He also revealed how England sought South Africa s help in understanding the mechanisms of a day-night Test in Australia.

In a report published by cricket.com.au, Anderson said: “We spoke to the South Africans when we played them in our summer (this year) and they said it was difficult in the twilight period and when the lights came on. So we tried to tap into them for as much information as we could.

“We’ve played one pink-ball Test match in England but not with the Kookaburra, so having the chance to come over here and practice with that and play a first-class game is important for us.

“I guess that’s part of the game, trying to find out if the ball does swing and especially what time of day it does it, so it’s really useful practice for us.”

On playing day-night Test at Adelaide

“Especially playing at Adelaide where the Test match is going to be.

“I’ve heard that it does swing a bit more, the pink Kookaburra, which is good for all the bowlers, to be honest.” 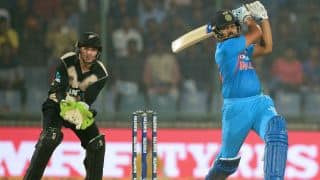