James Anderson did not travel to Bangladesh for the two-Test series.

England fast bowler James Anderson will join the squad ahead of his team s first Test against India at Rajkot. Anderson will arrive in Rajkot on November 8, just a day ahead of the first Test, which means he is a bit too late to play any part in the first Test. He will however begin to acclimatise with the conditions and also will continue to train with the England team and work closely with the coaching staff as well. Anderson did not travel to Bangladesh for a two-Test series as he was suffering from a stress fracture on his right shoulder injury. Full Cricket Scorecard: India vs England 1st Test at Rajkot

Anderson, England’s all-time leading wicket-taker, has however been bowling in the National Cricket Performance Centre at Loughborough and was cleared to travel to India, where he will continue to recover from his injury, according to ecb.co.uk. England had retained the same squad that travelled to Bangladesh, which rose speculations whether Anderson play any role in the series. Anderson however remained hopeful of playing a part in the series, just like he did in the 2012 tour, when England shocked India by winning the series 2-1. The BCCI in this series has agreed to use the Decision Review System (DRS) for this series, which it was opposed to earlier as they did not believe it was 100 per cent accurate.

England coach has also indicated that Anderson will play a role in India, but will not be fit for the first Test. The medical staff are very pleased with how he has come on in the last week or so. He has had more scans and is looking good. They haven t given any indication of when he might be available, but definitely out for the first Test in India, said Bayliss according to espncricinfo.com. 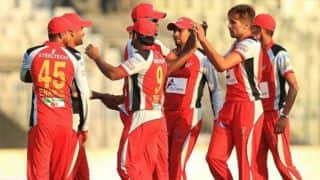