Stuart Broad believes that his squad is strong enough for the Boxing Day Test against South Africa in Durban, that missing out James Anderson for the Test is not a major blow for the team. Anderson had been ruled out from the first Test due to calf injury. Broad said that there were many other players willing to replace him. As reported on indianexpress.com, Broad said, “Of course it’s disappointing when you lose the spearhead of your attack but I think, rather than it being a ruled out of the series type thing, it’s just a slight niggle and the management decided that it really wasn’t worth the risk in the first match of the series.” ALSO READ: James Anderson ruled out of 1st Test vs South Africa at Durban with calf strain

“We have such depth in the squad that there’s no need to take a risk, it’s not a hammer blow to us. Steven Finn coming back to fitness and bowling so nicely last week, (hence) we have got the depth to cover. We only name the side the night before the game but I think everyone who has had a run out on this trip has really impressed.” Broad and Finn will be likely joined by Ben Stokes and Chris Woakes in the bowling line-up got the first Test at Kingsmead on Saturday. Broad added, “Woakes has been a consistent performer in the United Arab Emirates one-dayers (against Pakistan) and has continued that rhythm here.”

Broad said, “These sort of wickets are the type that you want to see Finn bowl on, good bounce, a bit of seam and he showed that against South Africa A.” Finn has proved his skills with a six wickets win over South Africa A in the last warm-up matches. He was the addition to the England Lions squad in two comeback appearances against Pakistan A in Dubai this earlier this month. ALSO READ: Stuart Broad insists England play attacking cricket vs South Africa like Ashes 2015

On Tuesday, the scans of Anderson’s reports confirmed he will miss the first Test, but he is hopeful to return for the second Test starting on January 2 in Cape Town. The England Cricket Board said, Anderson will undergo some fitness test towards the end of the first Test. Anderson has taken 426 Test wickets and broke the record of the Ian Botham during England’s tour of the Caribbean earlier this year. 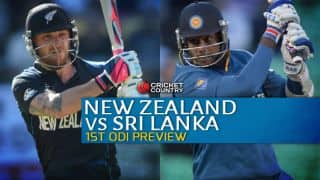