Faulkner added as cover as Australia were missing two all-rounders in Shane Watson and Mitchell Marsh.

All-rounder James Faulkner has been drafted in to Australia’s Tests quad to take on Pakistan in the two-Test series starting October 22. Faulkner will be a stand-by for all-rounder Mitchell Marsh who is still recuperating from a hamstring injury. The decision to include Faulkner was announced after the second One-Day International against Pakistan on Friday.

Australia’s two Tests are scheduled from October 22-26 and October 30-November 3 respectively. The Aussies have another all-round option in Glenn Maxwell who is explosive with the bat and can bowl off-spin. However, Australia were looking forward to giving Marsh his debut. Marsh was selected for the side in place for another pace-bowling all-rounder Shane Watson. Watson missed out on the tour due to injury.

Faulkner till date has played only one Test for Australia. He made his Test debut against England in the Ashes 2013 at The Oval. 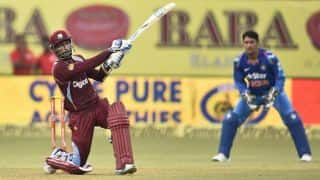