Australia are placed second on the table so far with 11 points from five matches, behind South Africa who have 12 points.

James Faulkner, who has spoken on the behalf of the Australian side ahead of the do or die match against West Indies in the Tri-Series, has suggested that the team is pretty clear about their current situation in the series. They have to win two games of cricket in order to win the Tri-Nation Series, which also involve South Africa. Since their group match against the Proteas was abandoned due to rain, the match against West Indies is their final group fixture, where as their opponents still have a match left after Tuesday’s game. Australia are placed second on the table so far with 11 points from five matches, behind South Africa who have 12 points after same number of matches. READ: FULL CRICKET SCORECARD: West Indies vs Australia, 8th ODI at Barbados

According to cricket.com.au, Faulkner added, “It’s been a pretty stagnated series so far. We haven’t played as well as we would have liked and the weather has played a role as well. If we don’t win tomorrow we obviously don’t deserve to be in the final. That’s the way I look at it and I’m sure most of the boys look at it the same way.”

The Australian all-rounder has not played many One-Day Internationals (ODIs) after his match of the match performance in the ICC Cricket World Cup 2015 final against New Zealand that helped his side. Australia have played 19 ODIs since then and Faulkner was a part of just nine of those games. The drink-driving misdemeanour in England last year, injury and then selectors ignored him. He wasn’t picked for the first two games of this series before finally being recalled for the third one.

“Anytime you miss cricket, it definitely hurts. I’d be lying if I said (it didn’t). I want to play in all conditions and do whatever I can to play as many games for my country as I can. I obviously had a conversation with the selector. I just want to play in every single condition. I think I do well on slow wickets and I think I do well on fast wickets,” Faulkner said.

“A lot of it depends on the dynamic of the team and the make-up of the team. I can control what I can control. When I get a bowl, do as well as I can for the group (and) when I get a bat, do as well as I can. It’s pretty simple. People can write and say whatever they want, but your career stats are your career stats and your performances right now count for everything,” the Australian all-rounder added. 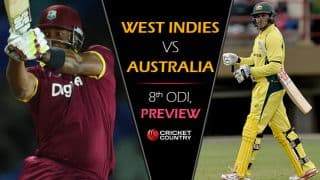