James Faulkner claimed his maiden ODI hat-trick, as Sri Lanka were shot out for an above par total of 288 within 49 overs, in the second ODI vs Australia, at Colombo.

Australia‘s all-rounder and fast-bowler James Faulkner claimed his maiden One-Day International (ODI) hat-trick, as hosts Sri Lanka were shot out for an above par total of 288 within 49 overs, in the second of the five-match ODI series, at the R Premadasa Stadium in Colombo on Wednesday. Despite the hat-trick, the Sri Lankan batsmen managed to put up an impressive show with the bat, including three half-centuries from Kusal Mendis, Angelo Mathews and Kusal Perera, while Mitchell Starc, Faulkner and Adam Zampa claimed three wickets each. Earlier, Sri Lanka skipper Angelo Mathews won the toss and elected to bat first, as he made a couple of changes in the side. He brought in Seekkuge Prasanna and Danushka Gunathilaka in place of Lakshan Sandakan and Milinda Siriwardana. FULL CRICKET SCORECARD: Sri Lanka vs Australia 2016, 2nd ODI at Colombo

Australia skipper Steven Smith made a change in the form of Nathan Lyon, who replaced Josh Hazlewood. The Sri Lankan openers in the form of Danushka Gunathilaka and Tillakaratne Dilshan were off to a shaky start, as with just 12 runs on the board, it was Gunathilaka, who fell for a mere couple to Mitchell Starc in the third over, followed by Dilshan, who fell for just 10 to Lyon the very next over. However, it was followed by an impressive 125-run stand for the third wicket between Kusal Mendis and Dinesh Chandimal, before Chandimal fell for 48, just a couple short of his half-century, to Adam Zampa in the 25th over. FULL CRICKET UPDATES: Sri Lanka vs Australia 2016, 2nd ODI at Colombo

However, it was Mendis, who eventually brought up his fifth ODI half-century, before falling at the score of 146, for 69 to Zampa again in the 27th over. It was followed by the wicket of Dhananjaya de Silva, just 12 runs later, as he fell for mere seven to Zampa again. Nevertheless, it was followed by another exquisite 103-run stand between Mathews and Kusal Mendis, as both the batsmen too scored their respective half-centuries. ALSO READ: James Faulkner 40th bowler to take hat-trick

At the score of 261, it was Kusal Perera, who fell for 54 to James Faulkner in the 46th over, followed by Mathews just 18 runs later for 57 to Faulkner again, in the 48th over, as the very next ball saw Thisara Perera being dismissed for mere 12, which also saw Faulkner claiming a hat-trick, thus becoming the 40th player in ODI history to claim a hat-trick.

At the score of 286, it was Dilruwan Perera, who fell for mere seven to Starc in the 29th over, as the very same over also saw Amila Aponso, fall for a mere couple, just a couple of runs later, as Sri Lanka were shot out for an above par total 288. 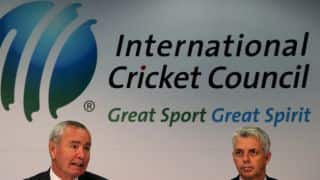 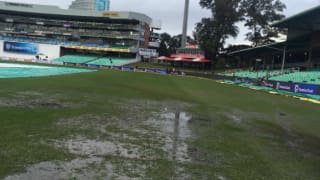