“I’ll paint a picture for you now. I’ve got James Faulkner who’s got his clothes off but don’t tell everyone,” Haddin was quoted as saying by ‘cricket.com.au’.

He added, “I’ve got a coach who’s spooning the World Cup who can’t speak. And I’ve got the Marsh boys, and you know I can’t even talk about the Marsh boys because you know what trouble they have. I’ve got Josh Hazlewood … he’s never been drunk in 30 years. It’s a problem. We just can’t get him drunk. He’s an absolute nightmare to drink with.”

Asked about the send-offs to New Zealand opener Martin Guptill and Grant Elliot during the final and the constant sledging by the Australians, Haddin said, “You know what? They deserved it. They were that nice to us in New Zealand (during their match in the pool stages) and we were that uncomfortable.

“I said in the team meeting: ‘I can’t stand for this anymore. We’re going at them as hard as we can. I said, ‘I’m not playing cricket like this’.

“If we get another crack at these guys in the final I’m letting everything (out). And I’m not going to play another One-Day game so they can suspend me for as long as they like.”

The 37-year-old wicketkeeper also said it was never his intention to offend anyone during a radio interview after the title win.

Haddin spoke with a Sydney radio station yesterday after celebrating his team’s title triumph with his teammates throughout the night.

“We were celebrating a World Cup win and enjoying ourselves after a long tournament. In hindsight, we should have stayed off the radio. If I offended anyone, it was never my intention.” 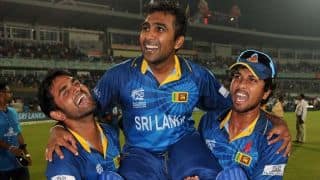