The other Australian bowler whose spell made a difference in this crucial encounter was Adam Zampa.

James Faulkner s bagged four wickets in his final six deliveries as he led Australia to a superb 21-run victory in ICC World T20 2016, Group 2 match at Mohali on Friday. With this loss, Pakistan have been knocked out of the tournament with Australia s fate to be decided after their final group match against India on Sunday. Faulkner who picked a total of 5 wickets in his 4 overs giving 27 runs dismissed Wahab Riaz, Sarfraz Ahmed, Imad Wasim, Khalid Latif and Sarjeel Khan. He was on a hat-trick twice during his spell but could not achieve it. Meanwhile, Shoaib Malik once again remained unbeaten on 40 off 20 balls, who was the second top-scorer for his side after Latif s 46. FULL CRICKET SCORECARD: Pakistan vs Australia, Match 26, Super 10 stage, ICC World T20 2016 at Mohali

Sharjeel Khan gave Pakistan a flier with his knock of 19-ball 30 during their chase. After Pakistan managed only 2 runs off the opening over, Sharjeel went after Nathan Coulter-Nile as they smashed the medium pacer for three fours. The first one went beat the third man, the second was once again cut to the third man boundary before the final ball was slapped over the bowler s head for a superb boundary. Coulter-Nile eventually was the most expensive bowler of the lot, giving 45 in 4 overs and made no breakthrough.

Sharjeel continued his fireworks; two more boundaries came in the every next over off Josh Hazlewood s over. However the bowler compensated the expensive over by making the first breakthrough. While Sharjeel was on fire on the other end, Shehzad should have chosen to play the second fiddle. However, he was in a hurry to join the party when he top-edged a swinger from Hazlewood which was easily caught by Coulter-Nile at mid-off, who finished an easy catch to leave Pakistan at 20 for 1. That immediately brought back the pressure on the Men in Green.

Khalid Latif was the new batsman in. The out-of-form Pakistani batsman nevertheless was the lone warrior for Pakistan after the dismissal of Sharjeel. Faulkner was handed the ball in the 6th over whose brilliant spell went underway then. That over happened to bethe turning point because he removed the set batsman Sharjeel in his very third delivery. Once again tempted to go for a big pull, he got his leg stump hit. Pakistan still needed 153 off 14 overs from there.

Meanwhile, the other Australian bowler whose spell made a difference in this crucial encounter was Adam Zampa. He picked the crucial wickets of Umar Akmal and Shahid Afridi. It was mostly the final international match of the Pakistani skipper. Afridi had just begun to attack the Australians, two balls were sent into the stands but Zampa ensured he did not make an irreversible damage. Going after almost every ball something Afridi did all through his career once again came down the track for a big one, missed it and Peter Nevill made no mistake in taking the bails off to send Afridi back to the dugout.

Earlier, Steven Smith and Shane Watson s fifth wicket stand of 74 helped Australia to post 193 for 4 in 20 overs. The Australian skipper who has been struggling to find form with the bat choose an absolute right match to bring out one of his best Twenty20 International (T20I) innings as he scored his second T20I fifty. Smith and Watson were unbeaten on 61 and 44 respectively. Pakistan s Mohammad Sami was the most expensive bowler of the lot, leaking 53 runs in his 4 overs. The Australian wickets were picked by the likes of Wahab Riaz and Imad Riaz. 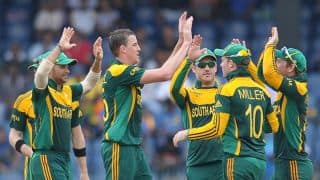