James Pattinson is relishing the success against a star-studded Indian batting line-up as his superb bowling effort resulted in Australia's comprehensive win in the first Test. 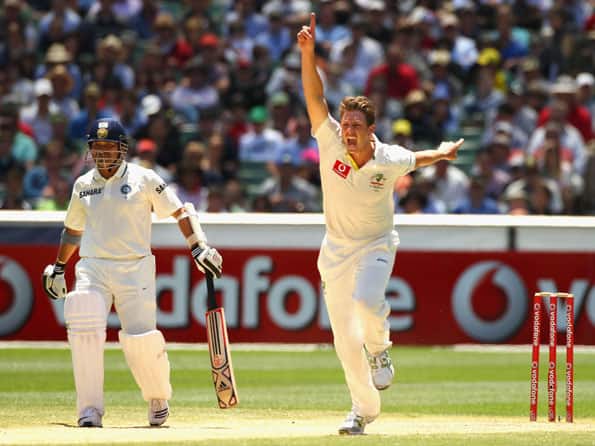 James Pattinson is relishing the success against a star-studded Indian batting line-up as his superb bowling effort resulted in Australia’s comprehensive win in the first Test.

The youngster returned match figures of six for 108 and also scored critical 18 and 37 runs from the two innings to earn man-of-the-match award.

“It’s a dream come true to play cricket for Australia at the MCG. To be out there on Boxing Day and against India with that batting line-up… I wasn’t even born when Sachin started playing international cricket so to go out there and bowl against him and have some success against their batsmen is unbelievable. To get a win is even better,” said the 21-year-old Pattinson.

Pattinson appeared to have done his homework against the Indian batsmen for he bowled in the areas which had specific visitors’ batsmen in trouble.

“I had a plan just to bowl good balls to Sehwag. He can hit good balls for fours. If we don’t let him get on top of us, when he’s doing that and we just stick to our plans, I think we’re going to go pretty well against him,” he said.

Pattinson was overtly aggressive against Indian tail-enders and once sent down three bouncers to Zaheer Khan which drew a warning on intimidating bowling from umpire Ian Gould.

Pattinson’s contribution with the bat was no less important as he put on 31 and 43 runs for the final two wickets with Mike Hussey and Ben Hilfenhaus.

“Nowadays, the way cricket is going, you need to be able to bat towards the end. You’ve seen so many valuable partnerships from the last two in many games of cricket, so it’s something that I put a big emphasis on in the nets.

Practicing and trying to get as many runs as I can for the team because it does help.

“It does put the game back in our sort of favour and the (rival) opening batsmen didn’t really want to be stuck out there too much longer, which they did. It was big for us and it’s just good that I can help out with the bat.” (PTI)