Australia pacers James Pattinson and Peter Siddle, who will lead the Australian pace attack in the Boxing Day Test against India, share a very special bond having known each other since a very long time. 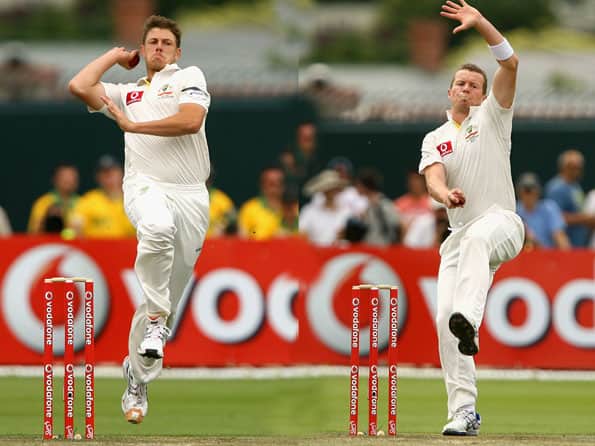 Australia pacers James Pattinson and Peter Siddle, who will lead the Australian pace attack in the Boxing Day Test against India, share a very special bond having known each other since a very long time.

Siddle used to face a flurry of barbs from a 10-year-old Pattinson when he opened the bowling for Dandenong at Shepley Oval along with the latter s brother Darren, in the Premier League cricket.

Pattinson would offer up his feats from the junior cricket and then 16-year-old Siddle, knew he would have to match them or the or the taunts from “little Jimmy” would never stop.

“I was just starting out really, pretty young myself, and he’d say to me, ‘I made 20 today’ or, ‘I took four wickets, what are you going to do today, Siddle? Hit a six will ya’. He was a real little pest. He’s 10 years younger than Darren and their old man would drop him off to watch us and he’d hang around all afternoon, chopping us from the stands,” Siddle said.

“And from seeing him as a kid then to open the bowling with him at Dandenong a few years after that, then with Victoria and now having the chance to walk out on the MCG together, take the new ball, to hear the roar, it is going to be something special,” Siddle was quoted by the Herald Sun.

Siddle and Pattinson shared the new ball attack at Dandenong earlier this year when Siddle was chief destroyer with the ball and the latter made a fine half-century.

This indicates that Siddle and Pattinson share a special bond having played domestic cricket together for Victoria.

Right-arm pacer Siddle had 13 first-class match experience before he was included in the Australian side, whereas Pattinson had played only six Sheffield Shield matches before being given the baggy green.