James Taylor looks at Shane Watson's send off as a compliment

James Taylor looks at Shane Watson's send off as a compliment

Shane Watson gave James Taylor a send off after clean bowling him.

London: James Taylor may have got out when well set during the first one-day international against Australia but the way in which Shane Watson bade him farewell from the crease has encouraged the diminutive England batsman. Taylor fell for 49 in Southampton on Thursday, his exit sparking the end of England’s hopes of chasing down a target of 306 in a match Australia eventually won by 59 runs to go 1-0 up in the five-match series ahead of Saturday’s encounter at Lord’s. SCORECARD: England vs Australia 1st ODI at Southampton

He was bowled advancing down the pitch, trying to hit Watson over the top. The way Watson, who towered over the departing batsman, suggested he had somehow been personally insulted by Taylor’s attempt to play a shot that has become a staple of limited overs cricket.

Taylor, given yet another chance to stake a claim to a place in a stop-start international career after England took the controversial decision to rest Ashes-winning batsman Joe Root from this series, took Watson’s a reaction as a back-handed compliment. “You always want to make an in impression on the opposition, and you know you have done that when you get a ‘send-off’. James Taylor expresses delight after being picked in England squad for ODI series vs Australia

“They’ve done that a number of times, and it’s always nice.” Taylor’s career-best 98 not out also came against Australia in England’s comprehensive defeat by the eventual champions in their first match of the World Cup in Melbourne earlier this year.

Far from regarding the way he got out on Thursday as reckless, Nottinghamshire batsman Taylor, who had earlier lofted all-rounder Mitchell Marsh for a straight six, has no plans to alter his approach.  “When I bat, and especially against a specific bowler who is bowling into my strengths, I go for it,” he said. Peter Moores remains unmoved despite reports of possible sacking, claims James Taylor

I’m confident with the shot, and I don’t do it half-heartedly. “The option was there, but I just missed it — and to be fair to Watson, he tailed the ball in, and that might have been my downfall.” The England selectors’ treatment of Taylor has often been bizarre.

For example, he was made captain of the side for a washed-out ODI against Ireland in Dublin in May, only to be left out of the squad which subsequently defeated New Zealand in June. But Taylor said it was down to him alone to secure a more permanent place in the England side. Shane Watson finds support in Glenn Maxwell after freakish dismissal in one-off T20I

“I have shown glimpses of what I can do … and it’s up to me to stamp my authority on the number three spot. “Joe may be resting but I want to be in this squad for as long as possible and make it as hard as possible to be left out. “It’s up to me to do that.

“That’s why I was disappointed to not go on [at Southampton], because it was my perfect situation — scoring and controlling the innings.” He added: “When I got whispers of the team [against New Zealand], I was bitterly disappointed. “I got over it quickly. I have been knocked down before and got up stronger, and that’s the way I try and look at it.” Shane Watson eager to prove himself in ODI series Australia likely XI for 2nd ODI against England at Lord's 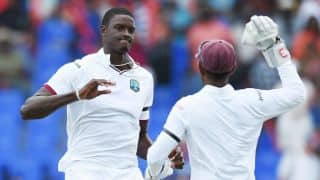