Jason Gillespie said he had “every intention” of honouring his commitment to coach English county side Sussex amid suggestions he could be the man to help lead his native Australia out of the ball-tampering crisis engulfing the national side. As Gillespie was speaking to reporters at south coast club Sussex’s headquarters in Hove on Wednesday, Cricket Australia confirmed former captain Steve Smith and vice-captain David Warner had been suspended from “all international and domestic cricket” for 12 months.

Meanwhile batsman Cameron Bancroft, who carried out the actual ball tampering at the behest of the leadership duo during the third Test in South Africa, was hit with a nine-month suspension. All three players have been sent home from South Africa and will miss the fourth and final Test of the series in Johannesburg. But coach Darren Lehmann remains in charge because management said he was unaware of the plot to alter the ball’s condition during the third Test in Cape Town — a match South Africa won by a massive margin of 322 runs to go 2-1 up in the series. Despite that backing, questions remain over Lehmann’s future.

Aside from questions of what he knew and when regarding the ball-tampering row, Lehmann has also been accused of overseeing a toxic culture where Australia players constantly ‘sledge’ or verbally abuse their opponents, only to complain when they themselves are on the receiving end. Gillespie, who played alongside Lehmann for both South Australia and Australia, has long been spoken of as a future Australia coach. And many believe the 42-year-old former fast bowler, who guided Yorkshire to back-to-back first-class County Championship titles in 2014 and 2015, could be the ideal man to take over in the current crisis.

Gillespie, however, insisted he was fully focused on the task at hand with Sussex while seeing out his time coaching the Adelaide Strikers in Australia’s domestic Big Bash Twenty20 tournament. “I have signed a three-year deal. I have every intention of honouring that commitment,” he said. “I have agreed that I’ve got a couple more years in Adelaide with the Adelaide Strikers, a job I really enjoy and cherish.”

Gillespie added: “I’ve only been here since Saturday — it’s a bit early to be talking about other jobs. I’ve just got here, barely been here a week. I’m really looking forward to it.” Otherwise, Gillespie refused to answer questions about the ball-tampering scandal.

But in a strongly-worded column for Britain’s Guardian newspaper on Sunday, he wrote of the current Australia side: “The reputation of a team who were already drawing scorn for their behaviour has been torched. The brutal reality is that this team are seen as arrogant and all too quick to dictate ‘the line’ to others.” 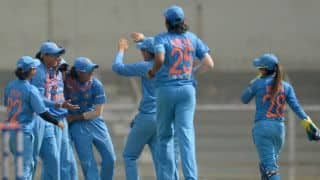