Gillespie said he would be "amazed" if Australia coach Darren Lehmann, a former team-mate with both South Australia and Australia, had been involved.

Former Australia fast bowler Jason Gillespie said there was no way Steven Smith could possibly continue as the full-time captain of the national side given his central role in a ball-tampering scandal that has “torched” the reputation of the team and stunned world cricket. But he said he would be “amazed” if Australia coach Darren Lehmann, a former team-mate with both South Australia and Australia, had been involved.

Smith admitted to having been behind a premeditated attempt to cheat after young batsman Cameron Bancroft was caught by television cameras deliberately roughing up the ball with a piece of tape during the third day’s play of the third Test against South Africa in Cape Town on Saturday. Smith was subsequently banned for one match by the ICC, just hours after he and vice-captain David Warner had stood down from their positions for the rest of the match, which ended in a crushing 322-run win for South Africa on Sunday as the hosts went 2-1 up in the four-match series.

But Smith insisted Saturday he had no intention of resigning the captaincy. Gillespie, however, said it was unthinkable the star batsman could continue as skipper.”Steven Smith s time as Australia s captain is surely up,” Gillespie, now the coach of English county Sussex, wrote in a column for Britain’s Guardian newspaper.”It is impossible to envisage a scenario where he stays in the job. This is a train wreck.” Gillespie, who played 71 Tests in an Australia side that were the dominant force in the five-day game in the 1990s and early 2000s, had no doubt about what had gone on at Cape Town’s Newlands ground.

“This was pre-planned cheating…The reputation of a team who were already drawing scorn for their behaviour has been torched. The brutal reality is that this team are seen as arrogant and all too quick to dictate ‘the line’ to others. It was not so long ago that Warner was ripping into (South Africa captain) Faf du Plessis for ball-tampering in 2016, saying Australia would never do the same. The events over the weekend have exposed this as rank hypocrisy.”

Smith insisted Lehmann had no prior knowledge of the plan to cheat and Gillespie, long-tipped as a future Australia coach, said: “I would be amazed if this was not the case and that the moves he (Lehmann) made when it all unravelled on the field were not done on instinct to protect his players.” 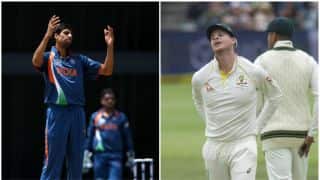