Jason Gillespie roped in by Sussex as head coach

Jason Gillespie roped in by Sussex as head coach

English county side Sussex have roped in former Australian Jason Gillespie as their new head coach, the club announced on Monday.

English county side Sussex have roped in former Australian Jason Gillespie as their new head coach, the club announced on Monday. The announcement also ends the speculation surrounding Matt Prior, who has said publicly that he was in search for a role at the club. Gillespie’s decision to coach Sussex also rules out his chances of committing a long time future with Australia. Gillespie, in 2014, decided to step down as the coach of Yorkshire. Following, he had moved his family back to Australia, in what seemed to be the end of his coaching stint in England. However, he has had a small stint in Kent in 2017 as the bowling coach, while the team continues to remain strong. Jason Gillespie, Peter Borren critical of Welsh club s unsportsmanlike tactic of declaring for 18-1

“We are thrilled that Jason has agreed to join us on an initial three-year contract. He will take up his post in the New Year, in time for our pre-season preparations and tour,” said Sussex in a statement. Steve Magoffin rejoins Worcestershire after 6-year stint with Sussex

“Jason is exactly the experienced Head Coach we had hoped we would attract to the role. He has enormous experience of the English county game after his very successful spell with Yorkshire. We believe we have a very talented young squad and we need a bit a bit of stability and a coach of Jason’s experience to help mould a successful team over the next few years,” said Sussex’s chief executive Rob Andrew.

“I am thrilled to be given the opportunity of taking the reins at such a proud and traditional club like Sussex. I know that there is some excitement around the capabilities of the current playing group. I look forward to getting over there and playing my role in helping Sussex achieve its on and off-field goals for 2018 and beyond,” said Gillespie, as reported by ESPNCricinfo. 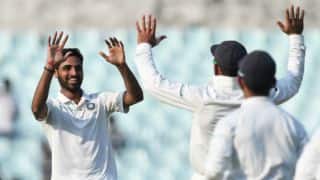 Shikar Dhawan roped in as brand ambassador for Alcis Sports