Jason Gillespie was floated as a frontline replacement candidate for Andy Flower.

Within hours of Flower’s resignation, Gillespie was floated as a frontline replacement candidate for which limited-overs coach Ashley Giles is now favourite.

However, News.com.au reports that Gillespie has clarified the position and announced that he would stay on his current job as the coach of county side Yorkshire at the present.

The report also said that the former Aussie quick is temporarily anchored to the Yorkshire role as he has four children under the age of eight, who are too young to adjust to a move.

Gillespie, who headed into the Zimbabwe midlands for his first coaching stint with the Mid-West Rhinos, has drawn excellent reviews at Yorkshire where he is happily residing on a staff contract, the report added. 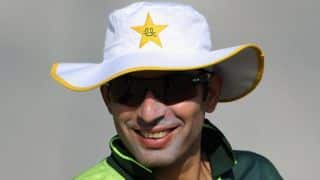