Former Australian pacer Jason Gillespie feels that Australia can win the upcoming series against South Africa, thanks to the absence of Jacques Kallis in the Proteas ranks and also their lack of depth in the spin department.

“I think Australia can win this – and win it a bit easier than people think. Australia … have got nothing to lose. I think all the pressure is on South Africa. They’ve lost Kallis, they’re nowhere near finding a spinner that can consistently put pressure on and play that holding role. Paul Harris was probably the last spinner that was able to do that with any degree of success,” said Gillespie who is now raising his profile as a coach in English county side Yorkshire, reported the Sydney Morning Herald.

“I just have a feeling South Africa, whoever they have bowling spin, is going to get belted, much like [Graeme] Swann. If one of the best spinners in the world can get treated with disdain like the Australians did against him, who knows what they’re going to do on spin-unfriendly tracks in South Africa against bowlers not quite the calibre of Swann,” added Gillespie about South Africa lacking quality spin bowlers to trouble Australia.

South Africa’s leading spin bowler is Robin Peterson, who has 21 wickets at an average of 37.29 and who also was part of the Proteas’ series win against the Australians over 14 months ago.

Another option for South Africa would be Imran Tahir who has a better head to head record than Peterson but was subsequently dropped after a poor performance against Australia Down Under.

Apart from Gillespie Australian opener David Warner has also targeted the South African spinners and has said he will not hesitate in going after them if required.

I think they’ll target Philander – and target him hard. He needs conditions to be [complementary to him], a little bit of nibble in the wicket,” said Gillepie who feels that the Australian batsmen may target pacer Vernon Philander.

“I think he’s a fantastic, very accurate bowler, but if there’s nothing through the air or off the pitch, I think the Australians will look to target him and put him back under pressure,” added Gillespie. 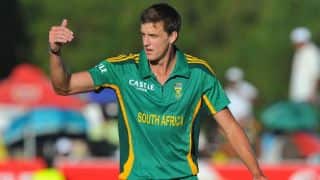